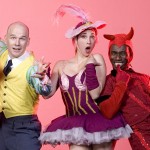 “Hit a home run and knock that devil clean out of the park!” No, that’s not the fiery encouragement of a WGN sportscaster and you won’t hear those words spoken at a baseball park this weekend. They belong to Billy Sunday, the Chicago White Stockings player who took up the bat for different management—that of evangelism—and you’ll hear such commands spoken at the long-awaited revival of “Billy Sunday” at Northeastern Illinois University.

Sunday’s take on the devil and temptation inspired Ruth Page to mastermind the “cartoon ballet” “Billy Sunday” in 1947. She wrote five monologues shaped around Sunday’s evangelical sermons and put them to choreography enacted by dancers in bright, expressive costumes. Despite its potential, the original production only enjoyed a limited run in France.

The dance was revitalized in 1983 by the Cincinnati Ballet, with a musical score composed by Carmon DeLeone. The new arrangement has a cheeky flair to match the exuberance of the movements and monologues. Traditional church hymns are mingled with constant undertones of “Take Me Out to the Ball Game.”

Now the dance is being brought to Chicago. This latest vision is directed by Venetia Stifler, head of the Ruth Page Foundation and artistic director of the dance company Concert Dance Inc., who finds that the themes of Page’s work continue to be relevant sixty years later. “We’re still having the same discussion about temptation in life,” she says.

Stifler didn’t have to change much of the original to prep it for modern audiences. “We brushed it up and added some new choreography,” she says. “We kept the scenery the same, the costumes the same, and the monologue that Ms. Page wrote is identical.”

The fresh choreography was made to accommodate the athleticism of modern dancers like acclaimed Chicago dancer and choreographer Harrison McEldowney, who plays the charismatic preacher, and to enhance the subtleties of the original. “If Ruth Page did an indication of the jitterbug, we did a full-out 1940s jitterbug.”

Stifler says that the dance is “a very accessible work. You’ll know what’s going on every minute. It’s lots of fun.” And in case another baseball-related event tempts your attention this weekend, Stifler offers, “Watching the show helps my nerves. I don’t have to worry if the Cubs have won.” (Tamara Matthews)