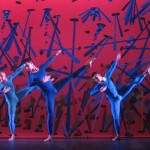 The most innovative dance choreography these days isn’t springing from the mind of some wunderkind fresh out of fine-arts school. It belongs to an 88-year-old legend who continues to push dance down avenues that no one else has discovered on the map yet. No choreographer continues to reinvent and change quite like Merce Cunningham does.

Since emerging from the traditions of Martha Graham’s dance company in 1945, Cunningham’s unique career trajectory has been undeniable. Bonnie Brooks, Department Chair of The Dance Center at Columbia College—which is hosting the Merce Cunningham Dance Company this weekend—finds Cunningham’s work exhilarating.

“He’s probably the world’s greatest living choreographer, setting whole new directions of what’s possible with dance. When you think about his whole body of work, what you see is this monumental experiment.”

It’s an experiment that has opened up new paths for dance as an artistic medium. Brooks places Cunningham as “the doorway into postmodernism. He moved away from narrative and in separating dance and music, he set up a situation in which dance could be its own discourse.”

Someone very familiar with that discourse is Robert Swinston, a member of the Merce Cunningham Dance Company since 1980 and assistant to the choreographer since 1992. He is an ardent believer in Cunningham’s methods.

“I’m a follower to the nth degree. Learning from Merce was to follow his path, because of his tremendous stature, and his ability to work consistently and deeply and to discover things about himself or about the body.”

The concept of separating dance and music is still a radical one and it’s a defining characteristic of Cunningham’s work. Audiences accustomed to traditional dance and music pairings have to adjust their expectations. Under Cunningham’s methodology, Swinston says, “The audience can relate according to their own imagination. They aren’t being guided to think or feel anything specific. Sound affects you immediately, but it takes time for movement to develop.”

Dancers accustomed to traditional dance and music pairings have to adjust their expectations as well. As a Cunningham dancer, Swinston shares, “You have to be self-reliant, you can’t just go in by music cue. The body rhythm is different than the musical rhythm. When we do all the rehearsals we are in silence.”

Chicago is fortunate to host the internationally popular Merce Cunningham Dance Company before it takes off to visit Australia and then France. This will be company’s third visit to Chicago in the last four years, part of a continuing collaboration with The Dance Center at Columbia College.

Appearing on both nights of the company’s stay is the piece “eyeSpace,” one of Cunningham’s most recent works. This inventive dance will charm many a gadget-loving technophile. Swinston says of the piece, “I think the element that is catchy is that the audience is given, if they want, iPod shuffles, and the music is in a different order for each person.” With everyone receiving the same visual presentation but a different musical experience, the concept of dance and music existing in separate spheres is made evident.

Also being presented on Friday are “CRWDSPCR” and “Crises.” Made in 1993 using the software DanceForms, “CRWDSPCR” is, as Swinston relates, “very influenced by the computer. You could call it the computer dance—very sharp, quick movements, sort of mechanical, a classic piece.” “Crises,” on the other hand, is far from Cunningham’s computer era, originally made in 1960. Swinston says, “The piece has a sense of drama to it. It stirs up lots of different things.”

Saturday will feature “MinEvent” and “Fabrications.” Swinston describes “MinEvent” as “a sort of short collage of dances, parts of dances or whole dances. This is actually more spontaneous. Depending on the theater and space, the event may change.” “Fabrications,” like many of Cunningham’s dances, was built through chance methods—such as a throw of dice—to decide what sequence the dance phrases go in. It is also, according to Swinston, “a favorite piece of all of the dancers that we all enjoy doing very much. We usually wear unitards all the time and this is one piece that we don’t. It has a lovely sort of resonance.”

Also on offer are master classes and a pre-performance talk by Brooks, which she says “will be a larger orientation to this kind of work and why it’s important. I like to talk about how much fun it is to watch Merce’s work.” Fun, exhilarating and exciting, certainly, but the iPod shuffles will have to be returned at the end.