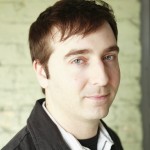 This is a ripe time for Chicago playwrights according to Brett Neveu, whose latest work, “Weapons of Mass Impact,” opens Monday at A Red Orchid Theatre.

Over the past six years or so, no other local playwright has had as much new work produced as Neveu. You’d think the guy has it made. “The problem with that is ‘playwright’ and ‘have it made’—those two things never go together,” he says as we talk by phone.

He made this observation, by the way, from his new home in Los Angeles, where he and wife Kristen moved in August with their daughter, Lia Pearl, who turned 1 last week. “Mostly it was because we had the baby and we needed to have some more stability money-wise—or at least try to get that stability.” Kristen, who is a mixed-media artist, was the first to land a job. She works at Warner Bros. in the art department. And like so many before him, Neveu is hoping to write for television and film.

If he lands a lucrative writing gig—which seems likely, judging by his success to date—he will join the ranks of other nationally known playwrights who subsidize their theater dreams with Hollywood dollars, including Craig Wright (“Six Feet Under”), Theresa Rebeck (“Law & Order: Criminal Intent”) and Chicago’s own Rick Cleveland (who was just hired to write for AMC’s “Mad Men”).

It is a smart move for Neveu, 37, who was supporting his family primarily on teaching jobs (most recently at Northwestern) and playwriting commissions, which pay anywhere from $5,000-$10,000, depending on the theater. Neveu has had no shortage of commissions—companies such as the Goodman, Steppenwolf, Northlight and Writers’ have paid him to write plays. Currently he has commissions from the Manhattan Theatre Club in New York and Royal Court Theatre in London.

I’ve been commissioned many, many times,” he says, but “I’ve only had one theater produce the play they commissioned.” That would be “Old Town,” a musical about backroom political dealings set on election night in Cook County, which debuts in April at Strawdog. “They put it in the season before it was even finished,” a rare show of confidence from a theater.

But Neveu’s artistic home in Chicago is still A Red Orchid, where the claustrophobic dimensions of the stage seem perfectly suited to “Weapons of Mass Impact,” about a trio of kidnapped women who endure interrogation at the hands of their foreign captors—and at the hands of one another.

The play is part of a trilogy that began with “Harmless,” seen last year at Timeline. (Part three is called “Old Glory” which Neveu is working on for Writers’ Theatre.) The plays each take place in the middle of the current decade, and they focus on how regular folks “mentally deal with the situations that crop up as a result of a country at war in the modern age.”

Despite the heavy subject matter, Neveu’s plays contain a sly sense of humor. He’s not writing jokes. The way Neveu sees it, people are just funny when they talk. “Especially in tense situations.” He doesn’t craft the perfectly articulated argument that would never transpire in real life. He writes dialogue that is riddled with awkward social niceties and subconscious hostility. He writes the way people genuinely talk, which is hilarious if you really listen to it.

The move to L.A. notwithstanding, Neveu is focused on theater. A possible strike by the Writers Guild of America “makes it harder for me [to get a job right now], so I’ll just wait until resolution happens. Whatcha gonna do?” He has a pair of commissions to work on, at any rate.

And regardless of what the future may bring, “I will always consider myself a Chicago playwright.”