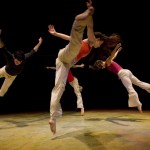 Choreographer Kyle Terry says that when words and intellect fail, the body has its own way of fixing things—of re-establishing balance and connection. This corporeal capacity is just one of the subjects of “Destructible Daytrip, ” Terry’s new show for Chicago Dance Crash. The other is the music of underground hip-hop legend El-Producto (aka El-P).

Terry’s been plotting an El-P-based dance production for years, captivated by the music’s creative possibilities: “El-P trades in more than the just hip-hop boom-bap, going in more experimental and ambient directions.” And that makes El-P’s music a fitting choice for an innovative, young company melding ballet and contemporary with hip-hop, break-dancing and even capoeira.

The title of the show refers to a lyric from El-P’s 2002 album “Fantastic Damage.” While El-P raps about invulnerable “pimps on an indestructible daytrip,” Terry wants to emphasize that our own daytrips are anything but. “I was thinking of a routine family trip and something going unexpectedly wrong,” he says. “Suddenly everyone’s hostage to the situation.” But the destruction is ultimately transformative: “There’s no change without catharsis.”

Terry admits he’s “a pretty aggressive dancer,” and he saves for himself the night’s most frenetic moment—or 1:33 to be precise (that’s the length of El-P’s jarring anti-war song “dear Sirs”). This hyper-kinetic, “balls-to-the-wall” solo—coming about halfway through the show—takes on the density of the music, as if Terry were frantically trying to unpack it for the audience before the song’s abrupt cutoff.

There are softer moments, too. In the unabashedly pretty “Intrigue in the House of India,” Terry gives his classically trained dancers—Vivian Chen and Laura Maceika in particular—ample opportunity to show-off some beautiful balletic extensions.  And then there’s the joy of “Sick Girls”’ pure strut and swagger, an all-ladies piece set to a thumping El-P mix.

For Terry, “Destructible Daytrip” exemplifies one of the things that dance can do best: make difficult music more accessible. “The body has its own way of making things clear,” he explains, “its own very specific range of expression.” (Debbie Goldgaber)