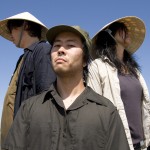 Chicago is a diverse city. Whether one says this in terms of its food, museums or neighborhoods, the statement is still true. Now, a group of local actors is striving to make it true of one more thing—Chicago’s theater scene.

dueEast Theater Company, in collaboration with A-Squared Theater Workshop, have joined forces to make the voices of Chicago’s Asian community heard. Their first production together, “Trial by Water,” by Qui Nguyen, tells the story of how, in 1988, 110 Vietnamese people tried to escape their country by crowding on a small boat. They were hit by a storm their first day at sea and began to drift. The group was stranded for thirty-eight days and by the time Filipino fishermen came to the group’s aid, only fifty-two passengers had survived. One of them was Nguyen’s cousin.

“This is a new play that is really well written,” says dueEast’s artistic director, Allen Hope Sermonia. “It’s the story of the playwright’s cousin and it not only captures the existence of the human condition after Vietnam but also sits apart in the way of other scripts that were written in the seventies and eighties that have already been done.”

Though dueEast has been a theater company in Chicago since 2003, they have only produced three plays, mainly because Sermonia and the rest of the company had trouble finding scripts they felt truly spoke to them. A-Squared was started a little under a year ago and this will be their first major production. Yet, Sermonia believes the mission of both companies—to represent Asians and Asian culture through the performing arts—is extremely important.

“We are the fastest growing ethnicity in Illinois and we are sorely underrepresented in film, television and theater,” Sermonia says. “I started as an actor and I kept finding that the really good roles are hard to come by. dueEast was created to allow that director, that writer, that actor to be represented. A-Squared as well is like-minded and it seemed like a natural partnership for ‘Trial by Water.'”

A-Squared Theater Workshop member Ghuon “Max” Chung thinks it makes sense that the groups are working together on “Trial by Water” and this particular piece is one that can bring their culture to the forefront of Chicago’s theater scene.

“The plot and character development within the story are so universal that it is kind of a morality play,” he says. “It begs you to ask the question, ‘What are you willing to give up to survive?’ Telling this particular story through Asian faces is what we’re all about.”

Chung hopes that in producing this play both companies, as well as the script itself, will gain some notoriety to ensure that the stories of the Asian community as a whole are not lost in the melting pot.

“In America especially so many cultures are being homogenized, which isn’t a bad thing because then we all get to learn a little more about each other,” Chung says. “But by homogenizing them too much they begin to lose their distinctive flavors…Chicago hasn’t had a consistent Asian voice in the theater community. We want that to change.”

Chung’s sentiments are shared by other members of A-Squared, including Mia Park, who is playing Sam Pham, a mother who puts her sons on the boat in the hopes they will have a better life.

“I’ve done commercial work for about eight years now and I see the same Asians in every audition,” Park says. “Yet, there’s so much great Asian-American talent in theater, scripts and plays. I keep meeting more and more people when I thought I knew them all.”

Park adds that she doesn’t know why it’s taken so long to get groups like A-Squared and dueEast together, especially when Asians have a presence in the Chicago rock-music scene, which she is also a part of.

“[Asians] are definitely a presence in the city all across the board,” she says. “It’s a very big city, very diverse. But we didn’t see our faces and hear our voices. There are great cultural-specific theater companies in Chicago like Teatro Vista and Congo Square. We want to be a part of that kind of theater, making the stories of our culture known.”