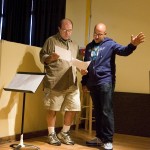 It’s bright and early on a Friday morning, and Eric Rosen, artistic director of About Face Theatre, almost apologetically warns me that he is coming off of a long night of rewrites for “Wedding Play,” his latest offering, in its world premiere at Steppenwolf’s Garage Theatre. But far from running on empty, Rosen, who is also the play’s director, seems invigorated: “It’s great, getting feedback,” he says, enthusiastic about the opportunities for down-to-the-wire fine-tuning that only reveal themselves when you’ve got a live audience in the seats. And as playwright/director (or, in his words, “a director who writes”) working on a project like this allows him to “author the whole thing all at once,” describing the process as “writing in three dimensions.”

Tackling multiple dimensions seems to be Rosen’s calling card, made evident even in the synopsis of “Wedding Play”: “After two and a half years together, Chicago playwright Adam Mace leaves his partner Tom (an actor in his theatre company) to marry Thalia, his best friend, star of his plays, and soon-to-be mother. Soon after the wedding, Thalia and the baby die under mysterious circumstances. When Tom is cast in Adam’s new play, ‘Wedding Play,’ he quickly learns that art is imitating life and that the death of Adam’s wife and child may have been no accident.” It’s been a three-year writing process for Rosen, but this story has been incubating for the past fifteen years, first inspired by Naguib Mahfouz’s novel “Wedding Song,” which Rosen tried to adapt for the stage. (In fact, that story serves as a basis for Adam’s play-within-the-play, “Wedding Play.”) Now, as it’s about to come to fruition, is Rosen nervous? Leave that business to someone with more free time on his hands, thank you very much.

Indeed, while other playwright/director’s might be in full-on nail-biting mode at this point, Rosen’s antidote to stress is hard work: “[As an artist] I try to be as unselfconscious as possible,” he says, “by staying very busy.” It’s precisely that absorption in the work that has made Rosen and company such highly prolific and successful staples of the Chicago theater scene. Thirteen years strong, About Face, with Rosen at the helm, has established itself as “national center for the development of gay and lesbian theater” committed to “working within and beyond the gay, lesbian, bisexual and transgender communities” to create what Rosen describes as “artistically rigorous theatre [that asks] ‘How do we legitimize the question of gay culture in America…so that what seemed radical is now commonplace?’” For Rosen and company, the key to combining artistry and activism lies not in latching onto whatever the perceived hot-button topic in queer culture is of the moment, but in asking questions, creating a dialogue, allowing the political conversation to be “responsive to, not predictive of, [the work] we’re doing…let the play teach [us] what it’s about.”

And teaching is without a doubt a priority right at the heart of this company—mentoring students in their Youth Theatre and Educational Outreach program is, in Rosen’s words, their “most important work.” The eight-year-old program is designed to create performance opportunities for young artists; “giving voice to queer youth” in the community—and their productions have garnered critical acclaim in Chicago and beyond. When asked which artists he’d say are the “ones to watch in Chicago,” Rosen is quick to note that those students from the program’s first year are now close to the same age Rosen himself was when he started his company, and speaks with an almost parental pride of the wonderful things he expects they will do as the next generation of Chicago theater artists.

That “passing of the torch” mentality is made all the more poignant amidst discussion that Rosen will soon be moving to horizons beyond Chicago, perhaps as the new artistic director of Kansas City Repertory Theatre. Though at the time of our conversation no contracts had been signed, no decisions made, Rosen was very open about his belief that changing of the guard would be creatively beneficial for both himself, and for the longevity of the company that has been his artistic home for over a decade: “I feel like I’ve achieved [even] more that I hoped to…[and that there is] danger artistically in staying in one place too long. I’m ready to hand over the keys.”