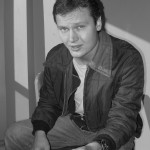 If you live in Lakeview and have ever dumped unwanted furniture curbside, there is a chance that end table or chair or whatever ended up in the back of Grant Sabin’s truck. And quite possibly, on a theater stage near you.

The 24-year-old set designer works predominantly within the storefront-theater scene, where the venues are small, and the scenic-design budgets even smaller—usually in the $500-$1,000 range. Sometimes less. To put it in context, the larger companies in town spend up to five and six-figures on their sets. So yes, Sabin—who hails from Rochelle, Illinois, a farm community west of Chicago—frequently stocks his sets with found objects, out of necessity, but also something else. “I think having limitations kind of forces creativity,” he says.

This month he has designed the sets for three shows, including “Butt Nekkid” at The Side Project and “A Prayer for My Daughter” at Mary-Arrchie (both of which begin performances Sunday). The third, Blindfaith Theatre’s “Lord Butterscotch and the Curse of the Darkwater Phantom,” opens at the Storefront Theater November 30.

Not surprisingly, Sabin has gone scavenging. The set for “Butt Nekkid,” about the music industry in Los Angeles, features recycled pieces of furniture and “a great pedestal sink found in the construction dumpster across from my apartment,” he says. “It looks new.”

The Mary-Arrchie show, which depicts a police interrogation in a squad room, has a set dressed with items used in “The Pillowman” (seen at the Steppenwolf last August), specifically some filing cabinets that already had the perfect labels: “warrants,” “fingerprint forms,” “criminal history.”

“I also needed a radiator for this show,” he says, “and having moved real radiators up to the second floor at Mary-Arrchie in the past, I thought I would have to cut it in my design. But when I was working over at Columbia College on ‘Pack of Lies’ [a recent student production], there in the lobby, under the drinking fountain, was a fake radiator. Apparently it was left from the previous show and wasn’t tossed out by the janitors, because it looked like it was heating the building. It’s great—lightweight, and now in the Mary-Arrchie show.”

On any given day, Sabin says, he will get in his truck and simply drive the neighborhood. “That’s the best way to find things. There’s tons of great stuff that gets tossed all the time in the city, just because it’s too hard to move, or whatever. There was an article I read about the freegans, which I guess is a new group of people that are trying to live more green—furnish their apartments with stuff that gets thrown out, things like that—and I was like, ‘Wow, those are my kind of people.’”

He’s even gone back to his hometown to dumpster-dive. His classroom set design for Dog & Pony’s “Ape” (staged earlier this fall) was filled with the kind of chairs you only find in schools. “I actually went back to Rochelle for those. My dad’s a school principal out there, and in the basement of the school they had mismatched old chairs just kind of thrown by the boiler, so I grabbed some of those.”

Rochelle was also where he found the wood used to create the worn-and-scuffed barroom floorboards for “The Sea Horse,” at A Red Orchid in 2005. “One of my farming friends was taking down a barn, and I saw that pile of wood and thought, ‘Wow, that’d be perfect for that floor!’”

Since Sabin began working professionally two years ago, the Columbia College alumnus has been one of the most in-demand scenic designers in Chicago, and for good reason. He is frequently employed by the aforementioned companies—he is designing for “Fatboy” at A Red Orchid in January—and works on about twelve-to-fourteen shows a year. I can’t think of another local designer who is used as often as Sabin.

This spring he is an assistant designer on Lookingglass Theatre’s “Around the World in 80 Days,” and his work can also be seen at the Royal George, where he designed the set for “Forbidden Broadway,” currently in an open run.

Tiny stages and miniscule budgets are everyday hurdles for fringe theater companies, and from a design standpoint they can be debilitating. Too many young companies give short-shrift to design and the results can look cheap and uninspired—even depressing, when a crappy set becomes an obstacle the actors must overcome. (Money isn’t always the issue. Often the lush scenic designs at Chicago’s bigger Equity houses can be a distraction—so elaborate and literal, they start to resemble Barbie’s Playhouse.) But the set is the first thing an audience sees—even before we see the actors—and whenever I sit down and think, “That is an amazing set,” invariably Sabin’s name is in the program. What makes his work stand apart is that you are never conscious of the obvious money constraints. His designs are detailed and self-confident, and nothing reassures an audience more than an impressively executed set.

Not that Sabin would turn down a shout-out every now and then for his design-on-a-dime accomplishments. “Sometimes I wish that could almost be printed somewhere, like at the end of my bio: This set cost ten bucks.”