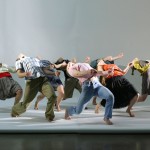 In a culture where technology moves forward at lightning speed and nearly everyone gets their fair, democratic chance at fifteen minutes in the limelight, a fragmentary residue of broken-up narratives often gets left behind.

“Cinderbox 18,” the latest work from Lucky Plush Productions, explores the state of a society obsessed with the purported realness of reality TV and the false intimacy of Web 2.0 creations like MySpace. Julia Rhoads, artistic director of Lucky Plush, says, “Loosely, the entire show was originally a response to the reality programming that is so prevalent.”

As the work evolved, however, Rhoads says it took on a wider scope. “We started looking at that weird disconnect of people trying to make connections and failing to make connections. In our hyper-networked culture we are becoming disconnected from real interaction. It’s this interesting duality to me, and that’s what we’re exploring in this work.”

Duality is present in all aspects of the production, from the costumes that Rhoads says are “a blend between what a dancer/performer would wear to rehearsals and what they would wear on the street,” to the intermixing of dance with theater.

“I’ve always been curious about the tension between theater and dance,” Rhoads says. “Dancers are told how to respond; in theater you are responding in the moment, having a very personal and honest response. I feel like this is the first work where I’ve been able to do a deeper investigation into that idea”

One way Rhoads gives dancers a chance to respond in the moment is by creating a structure within which they can improvise words and movement. There is also a level of self-awareness as dancers talk on stage, questioning what they are doing and voicing thoughts like: “This doesn’t make any sense.”

These human moments provide relief to an audience that might be worried about drawing the correct artistic interpretation. The wall between performer and audience becomes transparent and Rhoads says that interpretations are dependent on the experience of each individual viewer. “You’re not just going to sit back and be entertained. You’re going to meet the work with your own ideas and that’s what’s entertaining.” Tamara Matthews)