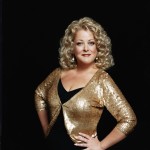 As she makes a grand entrance into an eighth floor conference room up in the Lyric Opera office complex, soprano Deborah Voigt is a mere shadow of her former self, literally. Her sparkling and intense crystal blue eyes and her smooth facial features, which have always been radiant, are more pronounced, her blonde hair down and straddling a more defined head. Voigt’s presence is as impressive and imposing as ever, but the sheer size is literally half of what it was: in what may be the most public body transformation of modern times, Voigt lost 135 pounds following gastric bypass surgery.

“It’s been so much fun,” she admits, flashing a smile as she settles in nursing a large paper coffee cup. “I have actually been playing ‘pretty girl’ parts, the ingénue roles that I never even dreamed of playing.” Most recently, Voigt sang Maddalena in Giordano’s “Andrea Chénier” in Barcelona, a tremendous thrill for her, but a role that is so “plastic” that she is unlikely to sing it again. “I like the girls that you can really sink your teeth into,” says Voigt, “roles that really excite me both for the music and for the drama.”

The biggest such role of all is that of Brünnhilde in Wagner’s “Ring” Cycle, a role that Voigt seems born to play at any size and will sing on stage for the first time in her career next spring in Vienna, even though the classic image of Brünnhilde is that of a horned, helmet-clad, spear-chugging woman so large that it is where the adage that “it ain’t over until the fat lady sings” comes from. “I haven’t been in a hurry to do it,” Voigt admits. “I actually put it off last spring, feeling I wasn’t ready yet.”  At issue for Voigt is the fact that her body, her “resonating chamber” as she calls it, has been altered so radically that even going back to roles that she has performed countless times, such as the Empress in Richard Strauss’ “Die Frau ohne Schatten”—ironically translated as “The Woman Without a Shadow”—that she will open here Friday, is a process. The very day we are meeting she has flown in her voice teacher to work with her. “It feels very good,” says Voigt of the role, “but there are things you can miss. I never go by what I hear, but by sensation, and my ‘muscle memory’ of singing this role feel very much the same as they were before.”

The headline-making incident that led to Voigt’s transformation had to do with what has become infamously known as the “little black dress,” probably the most notorious dress since Monica Lewinsky’s. Voigt had been engaged to sing her trademark “Ariadne” at Covent Garden when a director felt that she could not bring credibility to his conception of the role, which required the lead to sport a revealing black cocktail dress. Rather than make an accommodation to Voigt’s size, Voigt was released from her contract with full pay, and a lesser singer in every respect was brought in. “It was unfair, to be sure,” says Voigt in a matter-of-fact manner, “and though I did use the money to get the surgery, which I had been thinking about for years in any case, no one can make you lose weight if you are not ready to do it.” Coming full circle, Voigt has agreed to return to Covent Garden next spring to sing the very same role in the very same dress but is quick to point out that she is not “rewarding” bad form, but rather facing the fact that “as an international opera singer, I cannot punish the British public for what, at most, five people did. Covent Garden is London’s opera house, and you want to sing in England, that’s where you have to go.”

This refreshing sense of fairness and forgiveness seems remarkable in a diva-driven profession, and betrays Voigt’s religious and Midwestern roots. “I grew up in Wheeling,” she says, “although believe it or not, the only time I came to this opera house as a child was to see ‘The Nutcracker.’ ” Voigt learned to sing in church—she says her spirituality is still very important to her—and regularly sang in the choir and did solos. “My best friend, whom I met in junior high, still lives here and my Mom lives in Wisconsin. The music teachers who really made a difference in my life are all from here.”

But closest to Voigt’s heart is that her “hometown opera company,” as she calls Lyric, “will forever hold a close place in my heart because they made it possible for me to do a role that I always wanted to do, ‘Salome,’ but which I never dared imagine doing onstage. I used to joke that Herod should strip and do the dance, or that we would need a dance of seventy-seven veils, not seven.” Voigt had recorded the role and sung the finale in concert countless times but it was Lyric Opera music director Sir Andrew Davis pushing for Voigt to sing the role here after her weight loss that made all the difference. That spectacular production, created for Voigt one year ago, was the hottest ticket in the opera world and Voigt’s performance was unanimously praised by critics and opera lovers alike who flew in from every corner of the planet. It was every bit as high a peak for Voigt as the Covent Garden incident was a valley, and is this year being followed up by another new Richard Strauss production created just for Voigt.

“It actually took me quite a while to come down last year following ‘Salome,’ ” Voigt admits. “That was quite an experience. I was in the best shape of my life and my singing and my acting had come together in a way that I had never experienced before.”