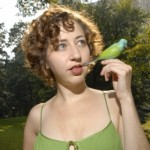 Kristen Schaal has done a little bit of everything—she’s best known for playing the obsessive Mel on HBO’s hilarious musical sitcom “Flight of the Conchords,” but she’s been doing sketch and variety shows for a long time, and her latest project is called “Penelope: Princess of Pets,” a series of video shorts about a girl who can talk to animals (and is supposed to kill a senator to save the world) airing on Superdeluxe.com.

You’ve done a lot of different things—sketch, films, television, commercials. What are you interested in doing most?

What I’m most interested in doing is something more like the “Penelope” shorts, because that’s a product of me and my comedy partner Kurt [Braunholer] having total control over the writing, shooting and picking everything out—costumes, etc. So I think I’m most interested in making my own shows. Not that it shouldn’t get bigger and bigger, but if you want to know what my ultimate goal in comedy is, I would say it would be to produce my own work but on a larger scale. I like working for other people, too, but I’ve had the most satisfaction from working on the “Penelope” videos.

It seems like there’s a newer class of comics that doesn’t really need to have a high profile to get their work out there—they’re making a name just on MySpace and YouTube. And it seems like you kind of fit in that vein.

Well, hopefully—I think it’s sort of a lucky time in that aspect. I was having a conversation with David Cross this summer, and he was talking about how the whole idea of road comedy is almost extinct now, going from club to club touring. So yeah, it is a different generation. It’s very exciting—it’s like television was in the early days where they weren’t sure what to do with it, so there wasn’t anyone controlling it, so you got to air your own style of stuff.

Did you audition for “Flight of the Conchords”? How did that come about?

That was something that was really good timing, where I was doing the HBO Comedy Festival, in either 2005, or 2006. Maybe ’05. And they were writing the show at that time, so they were writing that character and then HBO showed them a tape of me performing in that festival and they found me that way.

This is kind of a lame press-junket question, but I figured I’d ask anyway, just because I really want to know: what do you geek out about in the same way that Mel does?

I’ve been asked that before, and I’m glad you asked, because I need to come up with a better answer. I really do kind of geek out about comedy—I know that’s lame, saying comedy, but I just follow it so closely. I would have to say I’m a huge comedy fan, I just love comedy. I also geek out about Tori Amos, too. I’ve got all her albums, back to back, cover to cover. I’ve got all her b-sides. I love her, I love her to death. I don’t care if anyone doesn’t like her, I don’t care if anyone thinks it’s silly, but oh my god. She’s great. (Mike Schramm)