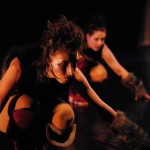 For the dance-curious but post-modern w(e)ary, dance showcases offer a sampling of innovative dance without the commitment, or cost, for that matter. With only about twenty minutes to present their work, performers are likely to leave their audience’s attention piqued rather than tested, and any too-obscure movement experiment is mercifully cut-short.

Running over two weekends, the second annual LinkUp Residency showcase is among the most promising and affordable (it’s free). Presenting their 2007 artists-in-residence at the Cultural Center beginning December 3, Links Hall, founded in the 1970s by a group of independent choreographers and artists, has essentially curated a show of Chicago’s emerging movement artists.

A look at the resident-artists’ bios reveals a refreshing lack of genre bias—among the residents are performance artists, musicians and, of course, choreographers. “The only stipulation we place on the artists is that the piece developed over the course of the residency incorporate movement. We consciously left the nature of the movement undefined,” explains Jennifer Thornton, managing director of Links Hall. The result is a showcase including everything from dance inspired by classical opera (Kairol Rosenthal’s “Intimae”) to a musical performance paying homage to a reality-TV star (Dan Mohr’s “Guns, Aloe”).

The Links Residence Program, in its fifth season, has gradually increased its scope. Originally providing its resident artists with weekly access to studio space, residents now receive a cash grant, mentoring and, most importantly, multiple performance opportunities. Having already presented their work at the Links Hall work-in-progress series, the fully produced showcase at the Cultural Center’s Dance Studio marks the culmination of their residency—giving the artists a chance to reach larger and more diverse audiences than they would otherwise draw.

The residency program is exactly the kind of opportunity that Jonathan Meyer, dancer and artistic director of Khecari Dance, was looking for when he moved his company from the flatlands of Taos, New Mexico to Chicago. “Taos has a long history of supporting the visual arts but, given a population of 6,000, the performing arts have a much harder time. I was looking for the opportunities and the audiences that a city like Chicago could support.” Originally slated to present “Opal Door”—a theatrical meditation on apocalyptic themes that Khecari performed at Links Hall back in March—Meyer opted to present an excerpt from his latest work instead.

“An Absence of Meaning Opens a Rift in Time”—the piece they’ll perform Monday—is taken from the third act of “The Wonder-Cabinet of Dr. Wunderkammer,” a show Khecari just closed at the Hamlin Park Fieldhouse. “Absence” explores, “on twin tracks,” what Meyer calls “the experience of throwness—a sort of productive failure of interpretation that simultaneously unsettles and fascinates”—and, yes, slime mold.

While the juxtaposition of themes yields a certain comic effect, Meyer is serious about the implications. As it turns out, slime mold, he explains, goes through biological phases and transformations that invite us to meditate on certain aspects of our own nature. Specifically, the individual spores comprising slime mold begin life autonomously but end up communally defined, developing specialized functions. The point for Meyer is that, at all levels of life, structures exhibit the unresolved tension between the individual and the community, producing in the process strange and sometimes discordant spaces.

Performed by three dancers—Julia Rae Antonick, Asimina Chremos and Meyer—“Absence” includes, along with intricate partnering, some movement improvisation that, Meyer admits, initially made him nervous. “You have the sense of offering something to the audience but not really knowing exactly what it is.” On the other hand, given the piece’s exploration of meaning and interpretation, improvisation seems entirely natural and appropriate.

Presenting symbiosis of a different sort, LinkUp Resident Dan Mohr, performs “Guns, Aloe: The Worldly Observations and Further Breakdown of Andrae Gonzalo” during the production’s second weekend. The show, “part song cycle, part confessional, part hazy exploration on the nature and purpose of fashion,” is based on the actions of the “Project Runway” reality-TV star. Obviously impressed, Andrae, who attended the premiere performance of Mohr’s work back in September at Links Hall, plans to host Mohr in L.A. next year. A reminder, perhaps, to support and appreciate local emerging artists while they’re still local.