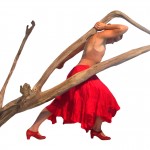 Flamenco has this quality of accumulating intensity, such that, during its characteristic transitions, the dancer can appear dramatically frozen—as if it were only the air left trembling in the movement’s wake. Its distinctive staccato gestures and dramatic postures lend it to being viewed as a series of linked stills or moving images. “Jondo Portraits,” the interdisciplinary production by Clinard Dance Theatre premiering December 12 at the Cultural Center, picks up on this quality—and extends it both structurally and visually.

“Movement is not necessarily a flailing or external thing—it includes stillness,” explains Wendy Clinard, the company’s founder and artistic director. No doubt her training as a visual artist predisposed her to think about dance in terms of discrete images. “Everything I see speaks to me in portraits, so there’s a certain natural weaving quality to the way I create.”  In the case of “Portraits,” this involved linking together traditional flamenco choreography with contemporary visual art.

“Portraits”—a series of three vignettes thematizing madness, loss and longing—is structured around visual elements that determine the nature and sense of the movement itself. In the first piece—“Madness”—a swirling collage of Chicago-based artist Thomas Master’s ink-work is projected on stage, while in “Loss,” the second vignette, flamenco dancers in traditional garb haul around a massive, totemic wood sculpture. But, as in classical flamenco, the essential element is the music.

Traditional Jondo, a spiritual branch of flamenco music, deals with the very themes of death and mourning that the piece explores, but the music for “Portraits” is an entirely original score. Composed by the noted Damascus-born cellist Kinan Abou-afach and adapted for flamenco by Spanish gypsy guitarist Pedro Cortez, the score will be preformed live by seven musicians—including Kinan on cello.

For all this talk of structure, “Portraits” is not overwhelmed by its formal elements. Like flamenco itself, the formal aspects are a means to a kind of emotional and spiritual release. “My intention,” explains Clinard, “ was to choreograph non-linear images, movements and sounds that free the predictability of our senses.” Not for the sake of seeking any solution to the complex human states explored, but, instead, for the sake of “an animated, dynamic understanding.” (Debbie Goldgaber)