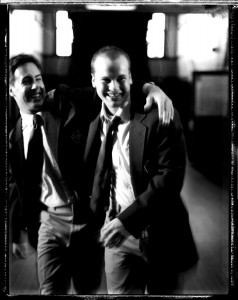 “Yeah, I was a real asshole,” declares actor Stephen Louis Grush. He’s looking out the office windows of the Steppenwolf Theatre, wearing black jeans, an inside-out black t-shirt, a grey hooded camouflage jacket and a black sports cap. “I used to joke that Stephen’s going to be a significant actor—if I can keep him alive long enough,” says Joel G. Fink, theater conservatory director at Roosevelt University, Grush’s alma mater, and someone who’s known Stephen for the past five years. “He gets into fights. I truly believe they’re never his fault. But sometimes I just want to smack him.” Grush’s left wrist sports some chain bracelets and a rubber band, and on the knuckle of his right-hand index finger there appears to be a minor scrape or cut.

Just 24, he’s starring in the Steppenwolf’s production of playwright Roberto Aguirre-Sacasa’s “Good Boys and True.” In it, he plays Brandon Hardy, a well-off and privileged senior implicated in a sex scandal. “The world that Brandon has access to, that he was raised in, I know nothing about. I went to public school in Southern Louisiana, not a prep school in the suburbs of Washington, D.C. It’s a completely different planet,” Grush explains. “I ran with some little upstarts back home. I guess I always had it in my head that I could do my own thing and on my own terms, you know? Unfortunately, my parents didn’t really agree with that.” So less of a good boy and more of a true juvenile delinquent? “Well, you know, that’s what the courts called me,” he says after a pause and with a puckish grin. “But I disagree. No, I wouldn’t say ‘delinquent.’ I got into trouble. Everyone’s got a past, right?”

Whatever Grush’s past, professionally he’s moving forward. After distinguishing himself at Roosevelt, landing on the radar of Steppenwolf casting director Erica Daniels (“He reminds me of one of our guys,” she says very matter-of-factly) and graduating in 2005, he’s been seen at various theaters including the Goodman and Chicago Shakespeare (in “Cymbeline,” where he brought humor and heart to his portrayal of a violent wild child). Every Thursday night he performs improvisational sketch comedy with The Cool Table, and he’s the co-founder of Thirteen Pocket, an independent artistic collective where he is trying his hand at screenwriting and playwriting. “Chicago is a very working-class city, art included. You’re able to hustle here and make a career out of your abilities and work ethic. And it’s got an amazing history of the type of theater that I’m interested in…very dangerous theater.”

“He’s a dangerous actor because you never know where he’ll go in his work,” Fink says. He goes on to explain how Stephen’s early years at Roosevelt drew comparisons to the work of a young Marlon Brando, Gary Sinise or Terry Kinney. “I’m not saying I’m comparing Stephen to Brando, but I understand how someone could see that.”

For someone who’s getting this kind of attention, the single, somewhat guarded, and soft-spoken Grush doesn’t seem to be letting it get to his head. “To be performing with such a talented group of people—I wake up excited to come to work. How many people in this city can say they’re so pumped to come to work? But then you got to bring the goods at the end of the day, of course.”

Clearly, Grush is bringing home the goods, as well as the steady paychecks. (“My first paycheck here was actually spent at a record store. I’m still reeling from that. I said, ‘Look at all this money. I’m going to get some vinyl.’ I’m a big music fan. It’s a vice of mine.”) Still, he hasn’t forgotten his past. “You know, a year ago I was working down the street at this terrible job doing grunt work. And this pizza joint that I’m looking at right here…I remember spending literally my last dime on a slice and just being sick to my stomach because I had no idea how I was going to pay my rent. I didn’t know what was going to happen and here I am looking at that same pizza joint from a window on the fourth floor of the Steppenwolf.”

At least now, Grush can afford the whole pizza instead of just one slice. “And share it with some of my friends,” he’s quick to add. And perhaps some more vinyl? Grush laughs. “I can’t see what else I’d spend it on.”