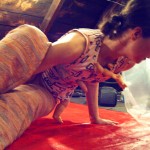 “It feels pretty lucky to have friendships with people you are star-struck by,” says Links Hall artistic associate Kate Sheehy.

Throughout the month of January she is ready to celebrate those creative minds by curating a loony little festival aptly titled “Method to Madness.” These multi-disciplinary events include puppetry, performance, film and sound. Each week, artists investigate the process of their creative practice, offering a behind-the-scenes exploration of what makes them tick. In addition to the four weekends of performances by local and national artists, each week features a different skill-share workshop designed to broaden the idea of what creativity is. These large concepts are what Sheehy has been intrigued by for years, several times opening her own home to performances in her attic and installations in her closets and bathrooms as part of her Random House Shows.

Sheehy thinks of her work as, “creating the space, then inviting that space to happen.” It has taken her a year and a half to create the space for “Method to Madness” in Links Hall.

If you want the full festival experience the following schedule will give you a great cross section: See Program Two (January 11-13) in which Clare Dolan of Vermont’s internationally renowned Bread and Puppet Theater gives audiences toy theater in “The Road to Brody.” This anti-war short story by Russian Jewish writer Issac Babel is part of an evening featuring five other artists. Then join the skill share Saturday morning (January 12) for “A Story In Miniature: Toy Theatre Workshop.” Punctuating the festival will be a special matinee performance (January 27) of Chicago Children’s Theater’s “The Selfish Giant” adapted and created by Blair Thomas/Fast Fish Puppet Theatre. This is merely a sampling of what “Method to Madness” has to offer. Get the complete programming lineup at www.linkshall.org. (William Scott)

This was on of my favorite festivals at Links Hall. Kate Sheehy, the artist who curated the series, is wonderfully clever and connected to a diverse and exciting community of artists. I’ve been really turned on to object-based performance due to the type of work that I saw here.