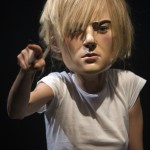 From an oozing liquid cocoon atop a long slab reminiscent of an examination table, a naked woman emerges and takes her place onstage, born anew. So begins renowned Italian imagist theater company Societas Rafaello Sanzio’s “Hey Girl!,” described as “an intense symbolic work that follows a girl’s evolution from birth through the brutality of adolescence to the sexual independence and power of womanhood.” Sanzio makes a stop in Chicago this weekend, taking up residency at Chicago’s Museum of Contemporary Art for two performances only. A fiercely original company that’s been garnering praise from audiences and stirring up political controversies throughout Europe since its inception in 1981 with director Romeo Castellucci at the helm, Sanzio first made its mark on the Windy City in 2002 with “Giulio Cesare” (Julius Caesar), at a time when the company was virtually unknown stateside. This time around, Sanzio is in high demand, making appearances in five major cities on the U.S. leg of its current tour, which includes stops in Minneapolis and Seattle, creating a resounding buzz throughout the art and theater communities worldwide.

Director of MCA Performance Programs Peter Taub, who was turned on to the company by an Italian colleague several years ago and subsequently brought their work to the museum, praises Sanzio’s “commitment to being radical” while at the same time keeping strong roots in traditional forms. “They are an exciting company that creates work that is difficult to describe and has this unpredictable electricity to it,” Taub says. “Hey Girl!,” which is staged as a series of visual tableaux, combines “a ferocious technical intensity” with “a very vulnerable human dimension” in its exploration of a woman’s fight for freedom and self-discovery in a world dictated by often rigid constraints and unattainable ideals of the traditional female role.

Deeply rooted in the visual and sound arts, the company, founded by Castellucci, his wife Chiara Guidi and his sister Claudia Castellucci, has developed a reputation as one of the foremost innovators of experimental theater. With educational backgrounds in art history, scenography and painting, Castellucci and company create provocative multimedia stage events that draw influence from a myriad of disciplines, marrying technological experimentation with historical themes and forms. Citing Artaud’s “theater of cruelty” as a strong influence, Castellucci has been both revered and reviled for his stark examinations of the human form, choosing to feature physically “deformed” performers in many of the company’s pieces. By confronting audiences with the rail-thin form of an anorexic, or the bare chest of a woman scarred by mastectomy, Sanzio pushes the boundaries of societal iconography of the body as art.

Taub will engage in a post-show discussion with Romeo Castellucci and members of his company following Friday’s performance, and Castellucci himself will lead a discussion on his work after Saturday’s show. In conjunction with the performances of “Hey Girl!,” the Instituto Italiano Cultura will feature an exhibition of photos by Luca del Piá of Sanzio productions from 1996 to 1999. The exhibition, which opens January 15 and runs through March 11, will include a sound installation by Chiara Guidi and Chicago-based composer and frequent Sanzio collaborator Scott Gibbons, who also created “Hey Girl!”’s electro-acoustic score. It will also be screening a film documentation of five episodes of Sanzio’s acclaimed production “Tragedia Endogonidia” (Endogonida Tragedy) on February 5 at 6pm.

This convergence in Chicago of “all things Sanzio” is reflective of the company’s ever-expanding ubiquity on the global arts scene. A YouTube search of “Sanzio” or “Castellucci” will turn up a rather impressive handful of video clips from several of the company’s productions. (In one scene from “Tragedia Endogonidia,” two full-sized cars drop from the flies, crashing to the stage below, seemingly unbeknownst to the gangly, underwear-clad man who is standing front and center, staring out into the audience. He doesn’t flinch in the slightest at this surprisingly—though the commotion does set the tail of what appears to be a real horse, stationed stage left, to swinging.) Shocking and surprising at every turn, Sanzio’s highly politicized work has been sparking debate beyond the four walls of any performance space or art gallery for over two decades, incurring efforts to ban their work by the Italian Ministry of Art and Culture in 1994. The company fought back on an epic scale, founding an International Convention of Theatre Censorship in Italy and winning the support of their community, and worldwide recognition, including a 1996 Ubu prize for resistance.