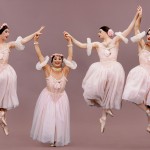 Every good classic needs to be turned on its head now and then. Enter Les Ballets Trockadero de Monte Carlo, an all-male professional ballet company that gives dance classics like “Giselle” and “Les Sylphides” a playful and entertaining makeover. The famous ballerina Anna Pavlova, for one, probably never imagined her definitive dying swan solo, “The Swan,” becoming an over-the-top affair mixed with molting plumage.

Since 1974 the Trocks, as the company is known, have used its fresh, yet admiring, perspective on classic and modern works to poke gentle fun at the often-serious nature of dance. Of course, seeing men in tutus helps drive the humor home for audiences.

This reversal of roles offers a redemption of sorts for the male ballet dancer, usually stuck in the background in a supportive role with limited moves and unfortunate costuming. Seeing men look elegant and graceful on stage is a liberating break in the stodgy ballet mold.

Since the start, the Trocks have harnessed their international appeal. Frequent touring takes them all around the world. England, South Africa and Japan alike all love the chance to see the unusual sight of men tottering on toe shoes.

Tory Dobrin, the company’s artistic director, says that this is largely due to the universality of Trock humor. “It’s physical comedy—most people, most countries, most nationalities, respond to that naturally. It’s not particularly American humor, it’s ballet humor.”

During the Trocks one-night stay in Chicago, audiences will get treated to Act II of “Swan Lake”—in which the wizard and the prince battle it out for the affections of the Swan Queen—the colorful and lively Russian classic “Paquita” and “Vivaldi Suite,” a Balanchine parody. One-hundred percent of the proceeds for the event will go to the AIDS Foundation of Chicago. (Tamara Matthews)