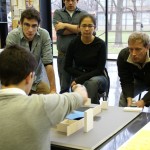 Talk to a choreographer and it won’t take long for the topic of collaboration to come up—from set-design to staging, it’s all about multimedia and multi-disciplinary approaches. Despite the recent buzz, such collaborations are hardly new to the dance world. Think Martha Graham’s famous lifelong collaboration with sculptor Isamu Noguchi (beginning in 1935) or William Forsythe’s association with architectural innovator Daniel Liebskind. Closer to home, we’ve seen Hubbard Street Dance company collaborate and perform with the CSO, to brilliant effect. In this context, HSDC’s latest multi-disciplinary enterprise—this time in collaboration with IIT’s College of Architecture—might be seen as an extension of previous efforts. But there are reasons for thinking that the company’s January 27 performance at S.R. Crown Hall will be a historic event of sorts. In addition to premiering some original choreography, the evening marks the culmination of an experiment original enough to inspire imitation.

The experiment began with the proverbial meeting of the minds. In this case, the minds of award-winning architect Dirk Denison and critically acclaimed choreographer Jim Vincent, artistic director of HSDC. Like his Harvard teacher Daniel Liebskind, Denison has a profound appreciation for dance—and presciently saw the possibility of a mutually beneficial relationship. Luckily, it was not difficult to convince Vincent. “The motivating question for me is always how to imagine presentations outside of the black box, outside the proscenium stage,” he says.

While it’s fairly intuitive that dance has something to gain from innovative spatial environments, it’s less clear what architects stand to gain from dance. Denison’s hunch was, well, quite a lot. “I feel strongly that dance is among the most conscious ways that we occupy space and building consciousness like that among architectural students is critical to their education,” he says. “Design, as a function, has a vocabulary—namely, space; in dance it’s about movement, body and space. So, the immediate goal was to explore the nature of this overlap.” Denison was convinced that in working jointly with choreographers and dancers, and directly accessing a related creative process, his students would come away with new methods for working.

There were, however, some pitfalls to avoid. Too often, both Denison and Vincent admit, collaboration amounts to little more than compromise. “What we were after was reaching new terrain,” explains Vincent, “a genuine integration of creative processes.” To encourage this integration, IIT students were exposed to movement classes at Hubbard Street. Far from perfecting their pliés, the exercises focused on “the experience of movement itself, stimulating awareness of the surrounding space and how to move in and out of it.”

More concretely, what brought the architects, dancers and choreographers together was a shared space—in this case Mies van de Rohe’s masterpiece, S.R. Crown Hall. Tucked amid several architectural gems on IIT’s South Loop campus, the iconic Crown Hall houses the school’s architecture program. Jokingly referring to the space as the glass-box version of a one-room schoolhouse, it was Denison’s idea to stage the dances here—no doubt because such an open, undifferentiated space offers the spatial equivalent of a blank canvas.

As anticipated, the unique space and its constraints encouraged the dancers and architects to play with what is typically a fixed-arrangement between audience and performers. To accommodate the diverse works in the context of a single, built environment, the designers seem to have adopted something of a peripatetic strategy, keeping the performers and audience moving. For choreographer Lucas Crandall’s piece, dancers perform on a ramp to a seated audience. Audience and performers then reverse positions for Alejandro Cerrudo’s work. Finally, the audience surrounds the dancers performing Brian Enos’ piece. Audience members are advised to wear comfortable clothes.

As with dance, innovation in architecture requires the capacity for spatial play—or experimentation. And while architecture directly thematizes space, dance, at its best, shows us new possibilities of inhabiting it. Viewed in this way, the benefits of this “cross-pollination,” as Vincent sees it, are barely realized: “This is the point from where we jump off—now that we’ve gotten into each other’s heads and into each other’s bodies.”