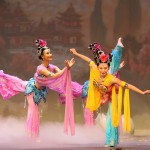 Most of us have probably already broken a New Year’s resolution or two already, but no worries: Chinese New Year is just around the corner.

“More people in the world celebrate the lunar New Year than any other New Year’s celebration,” says Yi Lui, who works with Sound of Hope radio, one of the Chicago sponsors of the Chinese New Year Spectacular. “It also is the longest-lasting New Year’s celebration since it begins fifteen days before the New Year begins and lasts another fifteen days after the New Year.” This year is the Year of the Rat, which officially begins at the new moon on February 7.

“It’s a fun and festive time,” says Sen Yang, president of Mid US Falun DaFa, another local organizer of the event, “because kids get to stay up late, eat special foods that you don’t get any other time of year, families are together and kids get gifts of money in red envelopes. It’s also the time when the god of the stove, or kitchen, reports on any bad actions of the family during the past year, so sweets are made to sweeten his report and since they are sticky, his mouth sticks together so he can’t report anything bad!”

Five thousand years of Chinese culture are celebrated with an array of dancers, vocalists and musicians in colorful costumes surrounded by authentic backdrops and dazzling projections that attempt to transport audiences back to the height of China’s Tang Dynasty. Performers include Beijing native Xuejun Wang, who subsequently moved to Australia and joined the Sydney Dance Company in 1992, tenor Guimin Guan, who has been nicknamed “China’s Pavarotti,” award-winning alto Jiensheng Yang and revered erhuist and Shanghai native Xiaochun Qi.

Ironically, at a time when an increasing number of goods bought and sold in America come with the label “Made in China,” the Chinese New Year Spectacular originated four years ago in New York City, but quickly mushroomed and is now seen in more than seventy cities across four continents, including Asia, although not in mainland China because of the event’s connections to Falun DaFa or Gong, which has been heavily persecuted on the mainland and was made illegal in 1999.

“Traditional Chinese still believe in God, the Buddha and the Tao,” says Yang, “but since the Cultural Revolution, they do not have the freedom to hold these beliefs in the open any longer.” (Dennis Polkow)