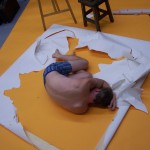 It is not every day that a dead playwright gets a world premiere. Tennessee Williams has always been a man of exceptions. SummerNITE (Northern Illinois Theatre Ensemble), the resident Equity company operated by Northern Illinois University, is bringing Williams’ voice once more to life in a way no one has ever experienced it—through Japanese tradition. The play is “The Day on Which a Man Dies.” Completed in 1960 and subtitled “an Occidental Noh play,” this dramatic departure in genre from the balmy Southern gothic to Japanese Noh was alluded to casually by Williams in an interview. It was dug up in 1991 by American scholar Allean Hale from the UCLA Library where it was deposited in 1970 with unnumbered pages. Since then the play owes its life in great part to director/designer David Kaplan.

Kaplan has been producing Williams’ work, both new and old, for much of his career. For the past three years he has served as artistic curator of the Provincetown Tennessee Williams Theatre Festival.  As such he says, “people tell him about plays.” “The Day on Which a Man Dies” came to him by way of Thomas Keith and Annette Saddik, the publisher and editor, respectively of the soon-to-be-published script. The confidently aggressive director knew it was for him. “The things that were hard and unusual and interesting, I had been doing for twenty years,” he says. Kaplan has studied and directed Tennessee Williams from Alabama to Hong Kong and in languages including Russian and Cantonese.  He knew immediately he wanted to do this piece strictly as an artist. “I didn’t want to produce it myself. I wanted to think about it as a designer and director and not have that other responsibility.” He was also weary of the delicate piece being buried in his festival.

“Is there something you want to direct that you can’t do in the festival?” came the call last November from Christopher Markle, a friend of Kaplan and artistic director of SummerNITE. “There is actually,” he said, and the project commenced.

The play is a reflection of sex as power using the Noh elements of dance, music and storytelling. The result is a work with the poetry of Tennessee Williams and the ceremonial tradition of fourteenth-century Japan. A famous American painter (inspired by Jackson Pollock) and his mistress argue violently in a Tokyo hotel room. They make up, make love and ultimately betray each other. Crucial stage directions mirror a form of Japanese performance art called Gutai. The tragic end for the painter and the eccentric means by which paintings are created onstage are characteristically Gutai.

Because of busy schedules the play was rehearsed for a week in June, a week in October, and two weeks leading to an opening on February 1 at Links Hall. While not the ideal, Kaplan is happy with the way it has served this piece by giving the performers time to study the material and do the appropriate research. Luckily too, he has previous relationships with several members of the cast.  Jennie Moreau, a former student of Kaplan, is an educator herself and teaches from Kaplan’s book, “Five Approaches to Acting.” After seeing Steve Key in “Orpheus Descending” at American Theater Company in 2005, she alerted Kaplan to the actor’s adept skill with Williams’ language.  The eager director arrived Super Bowl weekend last year to see for himself and was taken with Key’s talent; moreover, he appreciated Key’s willingness to join him for a drink after the show to talk Southern playwrights instead of rushing to watch the game. Lucky he did.

Kaplan is magnetic when he talks about his team and his work. He is excited by the prospect of sharing his knowledge of the things he loves. The cast and crew seem infused with the same excitement. And so they should be. There are three Tennessee Williams festivals in America and theaters everywhere are eager for new work. It has been some time since “The Day on Which a Man Dies” flowed from the pen of a man David Kaplan calls a “shaman of the human condition” and Mr. Williams’ tribute to Japanese tradition may only be beginning its journey in Chicago.