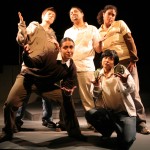 It can’t be often that the working-class town of Berwyn, Illinois, sees some gender-bending Latinas shaking their theatrical maracas for them in a sexually provocative show. So when Teatro Luna Artistic Director Coya Paz addresses the audience prior to a second performance of the remounted “Machos” at the newly minted 16th Street Theater, her customary pre-curtain request (“We love a rowdy audience so please, please, please be one”) seems to take on an added urgency. After all, it’s been just twenty-four hours since Coya overheard a middle-aged and conservatively dressed patron ask, “Is this a transvestite show?”

Coya expounds. “I will say that I was nervous. The mayor of Berwyn was here as well as anyone else who could afford a fifty-dollar opening-night fundraising ticket. You forget that the show has profanity and so many references to penis because, well, after ‘Lunatica(s) and S-e-x-Oh!…’” Coya is referring to two other Teatro Luna gems from their racy repertoire. “So I marched backstage and reminded the girls that if this audience is not very responsive it’s not their fault, ‘You guys are great.’ And then, of course, ten seconds into the show the Berwyn audience was probably one of the most enthusiastic we’d had.”

“They’re the prefect group to devirginize this space,” Ann Filmer, 16th Street Theater artistic director, says with a girlish grin and sunny disposition typical of what you’d expect from a tall, leggy, sandy-blonde-haired California native. “But I had no agenda. I’m not trying to shake it up. I was like, ‘This is a really awesome show.’ We have a new theater sitting here. Tanya (Luna co-artistic director Tanya Saracho) is already a playwright-in-residence and Teatro Luna is a great fit for this community because it’s over fifty percent Latino.” Saracho agrees. “There’s been a big influx of Latinos to the suburbs and Berwyn is one of those suburbs. This is a really smart thing for us.”

At an impromptu roundtable conversation with Paz, Saracho and the entire cast of “Machos,” which makes me the envy of every heterosexual male in Berwyn since it’s being held in these gorgeous ladies’ dressing room between their Saturday evening shows, they talk wholeheartedly about how things are going. “This is like the Goodman, there are actual dressing rooms!” exults Ilana Faust. “They made that for us,” understudy Miranda Gonzales lovingly says as she points to a dressing-room mirror. “We’re like VIPs here. It’s a really nice feeling.” Saracho adds, “And if we’re the first thing they’ve ever seen—if we establish their template for theater—that would be a rocking thing.”

So what’s next, beyond the Berwyn horizon? “After ‘Machos’ we’re doing our new show in March, ‘Sólo Tú,’ and then we’re doing a musical,” says Paz, beaming. Maybe, just maybe, that “Berwyn or Bust” motto may soon have to change to “Broadway or Bust!” (Fabrizio O. Almeida)