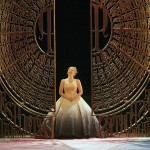 Encountering mezzo-soprano Joyce DiDonato on the first Friday in Lent, naturally, I am concerned: “Have you had any fish today?” I ask. “No, I should,” she admits dutifully, “but I haven’t.” Given that DiDonato’s Lyric Opera co-star, Peruvian tenor Juan Diego Flórez, pulled out of Rossini’s “The Barber of Seville” performances after reportedly swallowing a fishbone, perhaps seafood will become as scarce at Lyric as superstar sopranos who skip out on rehearsals. DiDonato does her best to keep serious, expressing concern for her colleague. “I emailed him,” she admits, “and wished him the best.” Opera, after all, can be a very dangerous profession, a “live and unpredictable beast,” DiDonato notes, though she is upbeat that Flórez’s replacement, Iowa-born tenor John Osborn, is “really exceptional” and “will be great.”

Ironically, when DiDonato was engaged as Flórez’s co-star for this production some four and a half years ago, the Kansas City native was barely known in the States, having made most of her career up to that point in Europe. But since she subsequently sang “Barber” at the Met with Flórez for a live high-definition television broadcast close-circuited to movie theaters across the country and was the recipient of the Beverly Sills Award last summer just before Sills passed away, DiDonato’s popularity has skyrocketed, and her Lyric Opera debut is being greeted with as much anticipation as was Flórez’s return after his spectacular debut here two years ago.

DiDonato was at Lyric in 1999 as an understudy in Handel’s “Alcina,” but never actually went on. “I stepped into a couple of rehearsals, though,” she recalls, when conductor and Wheaton native John Nelson heard her and engaged her for a few concerts. That experience was DiDonato’s first exposure to Handel, and it showed that early music was “a good fit” for her. “Handel, Mozart and Rossini have really been the basis for my early career,” DiDinato assesses. “They are wonderful teachers, because you cannot do this music halfway: they have really helped liven up my technique.”

But that was not DiDonato’s first trip to Chicago: “I was dating a guy in high school who later turned out to be quite gay, but that’s OK, he was a really fun boyfriend,” DiDonato says. “On prom day, he had this crazy idea that we should fly to Chicago at 8am, spend the day here and fly back in time for prom that night. We hit the Rock ‘n’ Roll McDonald’s, the Hard Rock Café, the John Hancock building and the Art Institute, which I’ve already hit again this week.”

DiDonato has sung the role of Rosina in “Barber” so far and wide now that she admits it has become a part of her bone marrow. “She’s been good to me,” she says. “The day portrayed in the opera is a day of discovery for her and everything that happens to her is new. What is never far from my mind, though, is that she will become the Countess in ‘The Marriage of Figaro.’ And this is a comedy so full of jokes and gags—especially this production, where the director has such a brilliant take on it all—that sometimes it’s a challenge just to keep a straight face.” (Dennis Polkow)