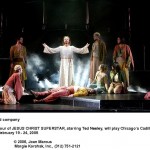 How long has Ted Neeley, the star of the 1973 motion picture “Jesus Christ Superstar, ” actually been playing Jesus? Even a cursory counting would suggest at least as long as the real Jesus Christ lived. “Actually, if the truth be told,” admits Neeley, “slightly over 2007 years, but you know what? The donkey still works, but he doesn’t like the cold weather very much.”

A soft-spoken and gentle native Texan who was raised a Southern Baptist and even offstage still looks remarkably like a middle-aged version of the stereotypical image of Jesus—complete with his own below collar-length-hair and his trademark “unique scrawny beard”—Neeley maintains a refreshing sense of humor about playing Jesus for so long: “When it comes to this role, I borrow Jack Benny’s line, except that instead of 39, I will always be 33. But there’s plenty of parts out there for a guy with this look—Jesse James, General Custer, and the one they’re thinking about giving me now is Dorian Gray.”

Neeley has been associated with stage versions of “rock musicals” since the phrase was first coined in the late 1960s. In addition to starring in the original Los Angeles productions of “Hair” and “Superstar” and going on to do both on Broadway, Neeley also performed the lead in the first fully staged version of “Tommy” under the auspices of The Who as well as the Broadway version of “Sgt. Pepper’s Lonely Heart’s Club Band,” where he had to audition for John Lennon and Paul McCartney.

As for “Superstar,” Neeley originally tried out for the role of Judas and “sang my heart out” for the audition, only to have the director come and put his arms around him and say, “That was great. Could we hear you as ‘the other guy?’” “I had done ‘Hair,’ which I used to say was actually Jesus, Judas and Mary Magdeline in Haight-Ashbury,” says Neeley. “Claude was kind of a messianic-like figure to the ‘turn out, tune in and drop out’ generation, who then dies.”

Playing Jesus really begin to click for Neeley when Carl Anderson was engaged to play Judas, the two having an instant chemistry and intensity together that even Neeley concedes “defies understanding.” “We were the yin and the yang of the project, and it just really worked somehow.” So much so, that when Norman Jewison was making the film version of “Superstar,” he had already cast his leads but paid them off and brought in Neeley and Anderson to make the film after screen-testing the pair “as blocking figures for the real cast,” says Neeley.

Neeley’s life beyond “Superstar” has been that of a composer and musician as well as an actor, having written and performed the music for Michael Landon’s long-running “Highway to Heaven” television series, as well as scoring—and appearing in—such films as Robert Altman’s “A Perfect Couple,” “A Touch of Gold” and “Blame it on the Night,” among others, as well as a Broadway-bound musical, “Pandemonium.” He also sang the title role of “Rasputin” for a concept album and appeared in “Waiting for Gigot.”

But somehow, “Superstar” has interceded along the way, first in 1992, when Neeley and Anderson were reunited for the first time since the film with an all-star cast that included Irene Cara as Mary Magdelene and Chicago native Dennis DeYoung of Styx as Pontius Pilate, a three-month tour that kept on extending for five straight years and even ended up on Broadway. “My thought at the time,” says Neeley, “was we were getting on in years, but if Carl would do it, I would do it.” Sadly, Anderson was preparing to be part of the current “Superstar” tour before he was diagnosed with leukemia and passed away in early 2004. “It was, and remains, devastating,” says Neeley. “Besides losing my best friend, I took it as a sign that it might be time to stop, but the fan base for this show is so amazing and persistent, and we forged on, at first trying to ‘replace’ Carl, which after a year and a half of searching, we realized was not possible. We found a lot of great singers who couldn’t act, and a lot of great actors who couldn’t sing.” Corey Glover of Living Colour finally ended up landing the part. “Like Carl and I,” explains Neeley, “Corey has rock ‘n’ roll roots and is an uncontained energy source and a wild beast roaming around that stage. He had an instant presence and a strength and confidence, because you have to be able to go head to head with Jesus. Audiences love what he does and he has made the role his own.”

Neeley continues, “People are still profoundly moved by this piece and are willing to accept me in the role even at this stage of my life, which surprises me more than anyone, although you do get a certain wisdom and deeper appreciation of what you’re doing as time goes on. And as long as they still accept me, I’m having a ball. If I were a beer-belly Jesus up there on the cross, that would be one thing, but my wife is a ballet dancer and cracks the whip so I eat well, and I have never been a smoker nor overindulged in alcohol, and have never stopped singing all these years.” Neeley admits, though, that being crucified eight times a week “takes a certain toll, to say nothing of the thirty-nine lashes.

“The star of this show is the music, that’s for sure,” he continues, “and we never forget that,” with Neeley’s favorite part of the evening occurring after the show when people come backstage and share their personal stories of how the piece has affected them over the years, a process that can last well into the wee hours. “It sounds so egotistical, but generations of folks have now told me, ‘You are my image of Jesus,’ because the humanity of the piece really speaks to them and so many tell me how they found their spirituality through this piece rather than through the dogmatic approach of the pulpit. It’s not about religion in an organized sense but about universal spirituality and the deep connection between all of us as human beings.”