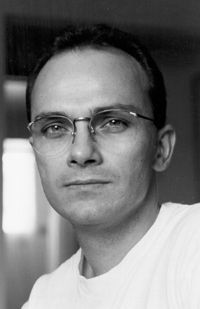 Keith Huff has been developing plays since the 1980s at Chicago Dramatists and has long been admired by Chicago theater-scene insiders, but with “A Steady Rain, ” a noir tour de force about two South Side Chicago cops’ harrowing experience on the front lines, he may well become a household name. “A Steady Rain” presents, in the form Huff has perfected that he calls the “duologue,” the occasionally conflicting accounts of the cops’ domestic disturbance call turned nightmare. The relationship between the police officers, friends since childhood, reveals itself to be increasingly complex as they come to terms with what they’ve seen, eventually reaching the scale of Greek tragedy.

Critics have noted the pitch-perfect dialogue, impeccable acting and humanity of the Chicago Dramatists’ production. In fact, the play’s Midwest premiere has met with fervent and sweeping positive reviews, many critics going so far as to wonder aloud how someone who doesn’t walk the thin blue line, could, as it were, write such lines. It turns out that Huff, in addition to being the son-in-law of a police officer, is also a veteran of the South Side Chicago bar scene, where as a child he joined his father and “just listened,” as he explained in an interview. Clearly a born writer, Huff is also a particularly ruminative playwright, constantly calling assumptions about memory and reality into question. His ability to infuse such philosophical inquiry into what appears at first blush to be a good-cop, bad-cop story bespeaks his undeniable talent.

Huff’s ear for parable and poetry—one could easily compare him to an even grittier David Mamet—combined with his other uncommon writing virtues, could easily land him a spot among hot playwrights, but he’s already proven he has staying power. In fact, he’s anything but an instant success, having written and directed dozens of plays for Chicago’s most prestigious theater companies as well as nationally. He’s won three Illinois Arts Council Playwriting Fellowships and awards including the Drama-Logue Award, the Cunningham Prize, the John Gassner Award and the Berrilla Kerr Award. It’s well worth keeping an eye on his theater while he’s still a playwright with a day job. (Monica Westin)