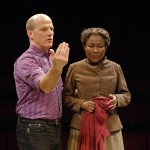 “I trust you to use this information as best you want to use it and I hope it doesn’t sound in any way saccharine or self-serving.” When director Charles Newell speaks there is a quiet intensity to his voice that is as soothing as the white-noise sound of the heater in the Court Theatre lobby. Sitting only inches away, he is clad in jeans and a snug black t-shirt, fit for his 49 years of age, eyes crystal blue. “I lost my mom February 18 during rehearsals. I was with her when she took her last breath. I held her hand and I talked to her as she passed. And that experience, which I’d never had before with anybody, that event happens in this production. Julie is with Billy when he takes for her his last breath. So how we thought about, structured and staged that scene changed radically.” Slightly misty-eyed at this point, a cathartic laugh quickly surfaces. “You know, we theater artists, we’ll steal from anywhere, especially our own life experience.”

For the non-musical cognoscenti, Julie and Billy are Julie Jordan, the simple mill girl, and Billy Bigelow, the rough carnival cad with whom she unexpectedly falls in love, the central characters in Richard Rodgers and Oscar Hammerstein’s six-decade-old musical “Carousel,” currently being revived by Court Theatre. Speaking with Newell, however, the knowledgeable musical theater fan can’t help but recall the character of Nellie Forbush, the famous “cock-eyed optimist” from Rodgers and Hammerstein’s other musical classic, “South Pacific.” “One has to be in our world today—and also certainly as a working theater artist—a sort of eternal optimist,” Newell says, sputtering with laughter. “After doing a season of ‘Thyestes,’ ‘Titus Andronicus’ and even ‘What the Butler Saw,’ I think it’s time for a little life-affirming theater.”

And is it a life-confirming coincidence that a lushly scored musical, despite an ill-deserved reputation for mawkish sentimentality in the general pop-cultural consciousness, almost caps off a brutal season of theater that reflected in its most raw and crudest terms how horrible the world can be (“Thyestes”) and how people may be stuck in their same cycles of violence (“Titus”). “My mother had been terminally ill for a couple of years. And though I made a choice to do this piece instinctually and for many reasons, I’m sure one of those reasons, without being in any way deliberate about it, was ‘oh my God, how am I ever going to survive her death?’ Because I have been and always will be very close to my mother.” If musical-theater purists have criticized Newell in the past for emphasizing the drama at the expense of the music, one cannot imagine “Carousel’s” eleven o’clock number, the anthemic “You’ll Never Walk Alone,” being turned into an intellectual exercise or anything less than an uplifting musical moment to melodically assault the emotions and soothe the sense of tremendous loss. Adds Newell, “It’s no accident that I’m doing a piece of theater in which there is this idea that we never walk alone.”

Looking ahead, there’s no denying that given Court’s musical production history (“Guys and Dolls,” “Man of La Mancha,” “Raisin” and now “Carousel”), Newell’s pronouncement that Stephen Sondheim’s “Sweeney Todd” and Jason Robert Brown’s “Parade” are favorites and on his musical short list, and the fact that composer Jeanine Tesori’s “Caroline, or Change” has been slated for next season, the musical may be here to stay. Indeed, could Court be gearing itself up to become Chicago’s version of England’s Royal National Theater, an institution committed to the traditional repertoire but reviving and giving the same serious treatment to the musical? Newell erupts into laughter. “I think that’s a great way to put it. I hadn’t articulated it so specifically. I certainly don’t feel like we have to do a musical every year but as I learned from my mentor, the late great Garland Wright who was the artistic director of the Guthrie Theater, musicals are as much a part of the American classical repertoire as any classic text. We actually invented them.”

And lest straight-play purists now worry that Court’s sacred season spots—those typically filled by Shakespeare or obscure pre-nineteenth-Century European classics—will give way to musicals populated with man-eating singing Venus flytraps or little red-haired moppets singing about “Tomorrow,” Newell is quick to allay such fears. “Life is short. We only have a certain amount of time so we might as well spend it on something that has some complexity and depth involved, at least that’s my emphasis and prejudice.” And then that laughter creeps in again. “At least we didn’t do ‘Sweeney’ as the musical. Too much! Too much!”