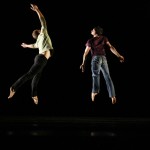 “We’ve had the opportunity to work with a very diverse group of distinguished voices, ” Artistic Director Jim Vincent says of the highly contrasting choreographers his company has showcased over its thirty years.  What sets Hubbard Street Dance Chicago apart from its industry peers is their athletic, innovated repertoire, a collection of pieces by some of the world’s most renowned dance makers set on a company of exuberant dancers. The 2008 Spring Series will consist of two programs featuring existing works from their catalog and introducing three new pieces to its repertoire.

“Two come from in-house,” Vincent tells of his choreographers. “It becomes a much more personal experience.  They are working with their colleagues.”  Company dancer Alejandro Cerrudo’s “Extremely Close” will take the stage during Program 1 (March 26-30). In this, his second premiere with Hubbard Street, Cerrudo draws from all around him.  “The inspiration came from many diverse sources,” says Cerrudo, “the dancers, the music, conversations with people that I’ve had, images, my past, other artists, memories.” Music is integral to Cerrudo’s work.  The 27-year-old from Madrid, Spain compares his relationship with music to that of you or I with air.  Vincent promises a sophisticated, subtle work with striking visuals set to piano solos by Philip Glass and Dustin O’Halloran.

Series 2 (April 1-5) will welcome New York-based choreographer and director Doug Varone to the Hubbard Street family.  His piece is “The Constant Shift of Pulse,” set to a score by contemporary composer John Adams. It is a rarity for Varone to give a work to be toured as much as Hubbard Street’s schedule demands. After some coaxing from Vincent, Varone agreed to set a piece on the entirety of the sizable Chicago company, a work that would not be accommodated by his own acclaimed company of eight. “If it feels like you are dancing it is wrong,” Varone tells his dancers.  “Many people say that my work looks spontaneous, and I love hearing that. It is all highly choreographed, but giving an audience the feel that it is happening in the moment is key.”

Also in Series 2 see Lucas Crandall’s “The Set.” It will be the Hubbard Street artistic associate’s first foray into humor with this Edwardian romp for three dancers.  “These days finding humor in dance is hard to come by,” Vincent says.  He thinks Crandall has found it.

“It’s always great to be home,” Vincent says, but they won’t get long to enjoy it.  After the short sit down, Chicago’s unofficial contemporary dance ambassadors will be off to Germany to show the Rhineland just what is great about dance. (William Scott)