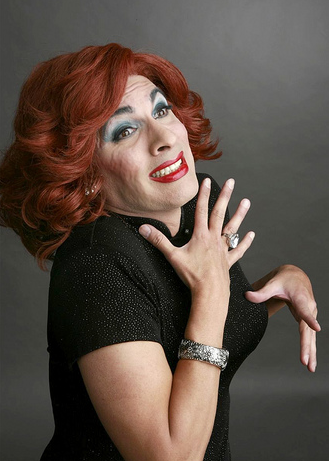 “You’ve slipped into my life as easily as vermouth into a glass of gin… quickly and just a bit too smooth,” Angela Arden, the grand dame in Charles Busch’s play “Die! Mommy, Die!” tells her gigolo suitor. It could just as easily be Joan Crawford or Lana Turner in any number of 1960s movie thrillers that serve as the inspiration for this contemporary camp classic. The piece elevated Busch to a larger pop consciousness when he starred in the 2003 film version, and now, for the first time, Hell in a Handbag Productions is introducing “Die! Mommy, Die!” to a Chicago stage.

On film Busch delivers a near exact cinematic match to the look and feel of these old movies; on stage his work is a broader, fast-paced, dysfunctional family drama that captures exactly what is magical about good old-fashioned camp. “Die! Mommy, Die!” is the story of an aging starlet who had lost her luster. She tries to pull her life back together, but has to first navigate a psychologically abusive marriage, ungrateful children competing for her well-endowed lover and a horrible secret that may lead her to desperate and deadly acts. And if her story reminds you of something from Greek mythology, say “Clytemnestra” maybe…well, that is by design.

David Cerda, the artistic director of Handbag, cautions against dismissing this type of theater, one that defines the work of his company, as merely one thing. “People think that camp is all glitz and glamour and wigs and it isn’t,” says Cerda. “These characters are played for real. We approach them like they are real.” Ultimately he believes that makes the work funnier, and despite death, sex and inappropriate family relations, it makes the work more honest and relevant.

“There is other stuff going on in my head,” Busch says, echoing Cerda’s sentiments. It is not enough for this consummate defender of classic stage and film genres to merely make fun of mediocre movies. “Recently, when we were going to do the play again, I began thinking about the mid–sixties and how it was really a turning point for American culture and how Americans see things. All the characters are having trouble adjusting.”

What sets the work of Hell in a Handbag Productions apart from other camp happening in Chicago is perhaps the same thing that sets Charles Busch apart from other playwrights writing it. They both embrace the fun, the shear joy in letting go and being silly and they both believe that camp can have substance. It is hard to believe that a company with Handbag’s aesthetic has not produced one of Charles Busch’s works in its six-year history. Cerda feels that now is the time and this is the show. The large and enthusiastic crowds already showing up to the theater seem to agree with him. (William Scott)