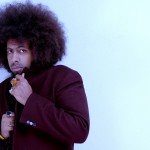 Afrika Bambaataa recently declared “How you act, walk, look and talk is all part of hip-hop culture. And the music is colorless. Hip-hop music is made from black, brown, yellow, red and white.” With hip-hop culture classes on college syllabi and the music’s rapid proliferation and endless re-interpretations and subgenres throughout the world, hip-hop is no longer a subculture but a permanent fixture and source of culture itself. MCA Performances, always cutting-edge and smart, talk back to its diverse elements and evolutions through this weekend’s “Hip Hop Live + Reel” series. The series will showcase an inspired and thoughtful collection of hip-hop film screenings and live performances, with nods to where hip-hop has come from and all the possibilities for its future.

“Hip Hop Live + Reel” will concentrate on four main elements of hip-hop: the music, both MCing and DJing, street art and beat-boxing. The film lineup might be the most exciting, with five seminal films focusing on these elements. On Thursday, Henry Chalfant, a photographer and videographer famous for his documentaries on urban culture will present his 1983 “Style Wars” and 2006 “From Mambo to Hip-Hop: A South Bronx Tale,” which go up at 7pm and 8:30pm respectively, with an appearance from Chalfant himself in between to discuss his work. “Style Wars” focuses on graffiti but provides a shockingly prescient study of break-dancing and MCing before the two blew up. “From Mambo to Hip-Hop” tracks musical rebellion in the South Bronx, studying the parallel developments of 1940s Mambo to the beginning of hip-hop in the 1970s.

A variety of films documenting individual figures in hip-hop will be screened on Sunday: 2004’s “Rock Fresh,” Danny Lee’s stylish study of five renowned street artists trying to make a living without giving into the temptation of the mainstream; “Breath Control: The History of the Human Beat Box,” from award-winning Chicago director Joey Garfield; and “Dave Chappelle’s Block Party,” which features performances from everyone from Dead Prez to Cody ChesnuTT.

Friday night brings renaissance man Reggie Watts, who gives testament to the range of what can fit under the heading of hip-hop: Watts beatboxes and freestyles in between deliveries of deadpan comedy, absurdist improv and sometimes-incoherent but massively entertaining forays into foreign-language accents. Combining stream-of-consciousness with satire, Watts could in many ways stand in for hip-hop’s multi-disciplinarity and reach. Joining Watts will be poet Deja Taylor and Teatro Luna, an all-Latina theater company who will put on their gender-bending “MACHOS,” an interview-based play about masculinity performed in drag.

The depiction of gender and power could have been a fascinating trope for “Hip Hop Live + Reel,” and for an art museum, the MCA could have considered a stronger focus on masculinity and hip-hop, especially their complex and sometimes anatagonist relationship to the media. Beat-boxing, rather, seems to be a running theme of the series, which seems to be a bit of an odd choice at first, given its declining weight in hip-hop today; in addition to Watts, acclaimed beat-boxer Yuri Lane will appear both on Sunday between films to answer questions (possibly about the place of his genre in hip-hop today) and on Saturday with the Suicide Kings, a spoken-word group that combines verse with a capella, vaudeville and even punk theater in “In Spite of Everything,” a performance piece about gang violence and school shootings. Also performing on Saturday are the winners of the 2008 “Louder than a Bomb” slam, a local Chicago teen poetry festival.

The MCA’s goal for “Hip Hop Live + Reel” is to present the rise and proliferation of hip-hop, and their lineup shows exactly how pervasive hip-hop culture is now by tracing the evolution of its quintessential elements. More than anything else, the ambition of the series should be commended, especially the focus on elements of hip-hop culture other than commercial rap music, as Danny Hoch has rightly complained about: “[The focus on rap] is proof that even the discussion around hip-hop as art as culture has been poisoned by this one-dimensional view of it as music. That’s why I’ve been on this mantra of ‘Hip-hop is not just rap.’” The MCA offers a smart alternative and counterpoint; as Surinder Martignetti, performance programs coordinator, points out, these diverse artists “show that hip-hop is more than dance and music; it is poetry, movement, theater and film, too.”