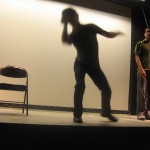 For thirty years, Links Hall has been a veritable epicenter of cross-culture multidisciplinary performing arts in Chicago. Evolving since its inception in 1978 as a small artists’ cooperative to a year-round producing organization, it supplies affordable rental and performance space for independent theater and dance companies and individual artists, offers a variety of workshops and lectures and provides artists’ residency programs supporting in-depth creative development of new work. In addition, since 2005 Links has dedicated a quarter of each year’s programming to three month-long performance series, curated by invited Artistic Associates. The final installment of the program for the 2008 season begins May 2—a Poet’s Theater Showcase entitled “Returning from One Place to Another,” curated by poet and essayist (not to mention former Newcity contributing writer) John Beer.

Beer’s interest in the inherent binding ties between poetry and performance runs deep; in citing the work of Sophocles to Gertrude Stein, Shakespeare to Richard Foreman, Beer gives credence to the historical fluidity of what defines the term “poet’s theater,” while recognizing what he sees as the “divorce between primarily realistic modes of theater and a lyric poetry rooted in subjective experience.” Beer’s efforts to address this contrary compartmentalization of the innately linked disciplines through performance has led to the assemblage of four poetic works that “retain a focus on language and structure while potentially abandoning traditional elements of narrative or staging,” developed by five genre-bending artists deservingly cited by Links Hall Executive Director CJ Mitchell as some of the most “innovative and distinctive” practitioners in the literary and performance worlds today.

Rodrigo Toscano, Joyelle McSweeney, Johannes Göransson, Fiona Templeton and Carla Harryman make up Beer’s visiting artist roster—which he is well aware reads like a who’s who of contemporary experimental language artists. “From the initial impetus [of this project], I made up a dream list of collaborators,” says Beer, “and I was able to get everyone I wanted.” Each artist/team has paired up with two or three local collaborators—each an influential member of the Chicago lit community in their own right (Jennifer Karmin, David Trinidad, Pam Osbey and Fred Sasaki, to name just a few), and will have a mere four days to develop and rehearse their performance piece before going live in front of audiences for a subsequent Friday/Saturday/Sunday run. In addition to the month-long performance schedule, Beer has organized a free open-to-the-pubic panel discussion to examine the theoretical and pedagogical aspects of performance poetry, featuring poets, critics and performers, including experimental performance heavyweights Jenny Magnus of Curious Theatre Branch and Goat Island’s Matthew Goulish.

Because of the “on-the-fly” nature of this project, surprises are most certainly in store for audiences and performers alike. “Writing itself is a kind of moment-to-moment performance,” observes Beer. And this programming seeks to reflect that idea, recognizing that “the mode of composition itself is a vital part of the [end result].” But it’s the process of making the work, not the product, that most interests Beer as a curator of this showcase of poetic theater: “[A certain] rawness is intentional,” he attests. “Traces of the process will be visible as part of the performance.” (Valerie Jean Johnson)