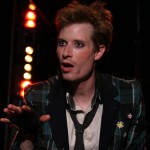 “People need theater, they just don’t know it yet.” David Perez is a staunch believer that Pavement Group, the budding company for which he serves as artistic director, has the play to turn the minds of the masses. Their second full-scale production, “Lipstick Traces” is a punk-rock extravaganza that flips history on its side and has been known to make theatrical believers.

Based on the book by Greil Marcus, “Lipstick Traces” was created by Austin-based Rude Mechs and it is a piece that had become synonymous with the rebel collective of multidisciplinary artists. It was in Seattle that Perez saw the piece performed. “I remember sitting in the audiences and thinking, ‘Wow, I want to do theater for the rest of the life.’” Now he is getting the chance to direct this life-altering change.

The production is an amalgamation of music, words and projections that recounts an alternative history of the twentieth century, and the “movements in culture that raised no monuments…movements that barely left a trace.” Along for the journey are Johnny Rotten, Sex Pistols manager Malcolm McLaren and assorted heretics. “Lipstick Traces” is quick and raw and unexpected.

“This play is not only for theater people,” Perez says, “It is a play that speaks to a lot of people who want we all want, to drink, to fuck, to fight.” This is a play that demands the audience engages. “What is this impulse that makes us want to be active participants in our life? What electrocutes us and makes us alive?”

Although this will be the Midwest premiere of “Lipstick Traces,” maybe more importantly, this will be the first time the show will be performed by a company other than Rude Mechs. Be sure this production will be unique to the emerging company.

“It was important to Kirk Lynn (the adapter of the play), and me as well, that the text we got from them, their adaptation, is theirs. We are doing the Pavement Group production of this play,” Perez says. It will be the largest show they have tackled with huge spectacle, big design and held in an unexpected location, AV-aerie at Fulton and Damen, more regularly used for live music.

Pavement Group is hell-bent to meet audiences on their own ground. They believe that art must be close to the viewer. “Lipstick Traces” is perfect counterculture bedrock for this group of young artists to build. When the city gets its first look at the piece it can be assured it will be a gritty homage to music and theater made just for Chicago. (William Scott)