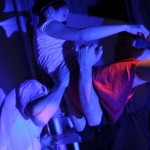 “My poetry lives more in the mouth and ear…than on the page, ” says multi-disciplinary artist Fiona Templeton. “And specifically in multiple mouths and ears.” She has been experimenting with the various intersections between the written and the performative as a poet, playwright, director and performer for more than thirty years—in both a traditional theater environment and often in alternative, site-specific settings. Her wide-ranging body of work (as solo artist, co-founder of London’s Theatre of Mistakes and the international performance group The Relationship) blurs and illuminates the lines between artistic genres through the use of audio, video and live staging. This weekend her work is being featured at Links Hall, as part of curator John Beer’s “Returning from One Place to Another: A Poet’s Theater Showcase.” Templeton directs two short pieces: first, an excerpt from Louis Zukofsky’s “famously obscure” experimental translation of Plautus’ “Rudens.” The second piece is part of a new work-in-progress written by Templeton herself, tentatively titled “Bluebeard.”

I caught up with Templeton shortly after her arrival in Chicago on Monday, and only a few hours before her first rehearsal with Joel Craig, Laura Goldstein and Pam Osbey, the local performers she’s collaborating with on both performances. When I ask about the possibilities and pressures of working with unfamiliar artists in such a short rehearsal period, she responds with an eager anticipation of collective discoveries. “I’m not teaching a piece…there are things [about the work that] I don’t know either.” Over the course of four days, Templeton and her ensemble will collectively develop the performative structures of each piece, and investigate the ways in which the two works communicate. “Content-wise, [these] are two separate pieces,” Templeton explains. “The connection is in the performance strategies.” Templeton describes these strategies as “an exploration of simultaneity,” where the speaking voice and the speaking subject shift, morph and coalesce—characters onstage may at any given time be speaking for themselves/as themselves, for each other/as each other, or vocalizing one another’s internal monologues.

While the “narrative” of each play is starkly different (“Rudens” is a somewhat darkly comedic tale of a girl kidnapped by pirates, while “Bluebeard” follows two people’s expedition into each other’s minds, fears and desires), it is in their linguistic action that the two converge. It is theater that Templeton illustrates as coming undone in many ways—rather than concretizing character and plot, “attempt[ing] to unbraid the multiplicity of voice.” “This,” she says, “is a theater that explodes.” (Valerie Jean Johnson)