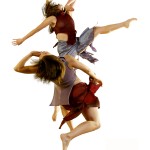 Last November, Same Planet Different World Dance Theater held its tenth-anniversary performance at the Ruth Page Dance Center. The show was a retrospective of the vernal company’s most popular works from the last decade. In “Vintage Modern”—as the self-contradictory title coyly suggests—we get a glimpse of the future along with the past, and witness how experience forges the identity of a young group on the cusp of maturity. SPDW has earned a reputation over the last decade for dabbling in eclectic moods and styles, often with a healthy share of humor and wit. This is largely thanks to a diverse repertory built by many artists—including local virtuosos like Shirley Mordine, whose late-1990s duet “Thin Ice” returns for this performance. The latter half of the SPDW term has seen, under the direction of Katie Saifuku and Joanna Rosenthal, rigorous evolution.

“We want to grow in every way possible: the number of performances we do, the number of pieces in our repertory,” Rosenthal says. “We’ve always had a variety of work and we’ll continue along those lines.”

Parallel ideas are woven into the fabric of “Vintage Modern.” The show is a concise hour and ten minutes, consisting of two duets and two trios—all by different choreographers—that work in complementary pairs. The title piece is a trio by Zachary Wittenburg, who lifted the name from a style of design that has become, somewhat ironically, timeless by sheer virtue of repetition. In contrast to Wittenburg’s large, balletic shapes is Ashleigh Leite’s trio “Drift League”—a deconstruction in which the dancers repeat, shuffle and rebuild a limited set of movements without use of their arms. One dancer compared the experience of being in both pieces to reading the same book in two different languages. Faye Driscoll’s raw, vibrant duet “Hearts on Fire” closes the show, serving in some ways as the female counterpart to the fraternal “Thin Ice.” “Vintage Modern” matches variety with unity, classical sensibility with playful experimentation—a tenuous balance honed by hammers of experience and time. (Sharon Hoyer)