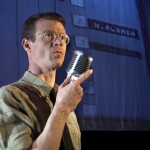 “If you consider yourself a serious writer in town you have read Algren, ” says director John Musial about the subject of Lookingglass Theatre’s “Nelson Algren: For Keeps and a Single Day.” “His voice is really distinctive and it is Chicago.”

Born in Detroit in 1909, Nelson Algren moved to Chicago’s South Side at the age of 3. As a writer he hit his stride in the 1940s, 1950s and 1960s. Often controversial, Algren’s poetry and prose flirted with social realism—he was a writer who spent his life chronicling what it was to live in the lower classes.

“He moved into the neighborhood of Wicker Park, which was a big Polish neighborhood at the time,” Musial tells. “He was interested in walking around and talking to people.” His insight and talent made him the recipient of the first National Book Award for fiction in 1950 for “The Man With the Golden Arm.” Algren is today memorialized through the Chicago Tribune’s Nelson Algren Award for short fiction.

Musial has lived with the words of this Chicago literary icon since the inception of the show, before it premiered at Lookingglass in 2001. Between then and now he has shepherded the project from performances on the rooftop of his South Side apartment to Lookingglass’ main stage to a television production on WTTW. Now, after a seven-year hiatus, Chicago gets another opportunity to know this writer as the theater company revives the work on the stage of the Museum of Contemporary Art.

“Coming down to work on the show again, I hoped it was as good as I remembered it,” Musial recalls. The director has been pleasantly surprised. The play is structured with one man, Lookingglass Ensemble Member Thomas J. Cox, playing Algren through readings of the author’s texts. He is assisted by two live jazz musicians and film also shot by Musial.

Although on paper the show has not changed much, the years that have passed have deepened the work on stage. “The older we get the denser the piece becomes,” Musial insists. “Its not a matter of lets put this up and crank it out. It is a piece that continues to develop.”

Chicago has changed since 2001, and certainly since Algren’s writings were published. But like many great works, the passing of years can deepen the words on the page and in performance. “I’m excited to see it in ten years when there is a real separation between old and young,” Musial says, referring to footage of Cox in the film portions of the show. Like the work of its namesake, “Nelson Algren: For Keeps and a Single Day” will continue on and continue to grow over time. (William Scott)