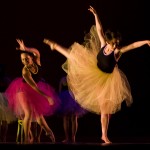 No matter if you’re studying choreography, composition or computer engineering, there are some things you just can’t learn in school. Education may provide the tools and—ideally—discipline necessary to excel in creative fields, but the qualities that define a master craftsman are only cultivated through time, experience and a fair amount of trail and error. We often see artists at the outset of their careers groping ferociously through the dark reaches of their interior world, mining for this ineffable gold; the result can be work of urgent, at times ponderous sincerity.

Lizzie Leopold directs one such group of serious young artists. Two years ago, her eponymous company moved from Ann Arbor to Chicago—Leopold’s hometown—after she and several ensemble members finished their Bachelors degrees at the University of Michigan. Since entering the professional world, the Leopold Group has been working to build their repertoire, and to create their own unique space in which technique and authenticity harmoniously co-exist. “We’ve been trying to take all of our technical background and use those techniques,” says Leopold, “but not have them be a default for us. As a new company, we’re definitely trying to find our voice, but in that exploration we’ve discovered a wonderful range.”

The new works on stage this weekend at the Harold Washington Library do reflect a variety of moods. Four of the five pieces presented are choreographed by Leopold and use very different styles of music and thematic content. “Too Much, Too Soon,” is a sweet-natured homage to her classical days, set to Bach’s Goldberg Variations. The cast gathers around a wooden chair (the type associated with cane-wielding ballet masters) and tumble about in tutus with sisterly glee, innocently doting on one another. A solo section near the end of the piece shifts tone; the piece becomes fraught with growing pains and the classical dance world of ponytailed girls in fluffy tutus seems to transform into metaphor for childhood—or remembrance thereof. It’s a tender glance back to the time when Leopold and her fellow dancers “realized we would never be ballerinas.”

On a darker note, “Peniel”—meaning the face of God in Hebrew—is inspired by the biblical story of Jacob wrestling an angel. Mentioned in the story are jars Jacob returns to tend before the match, so jars are chosen as the metaphors for the struggle. A white-clad trio caress, hoard, shake and shove forty glass ball jars scattered about the stage. Anguish is at a high for the duration of the piece, but there is a palpable sense of another struggle happening at an immediate level—that the dancers on stage are grappling with the daunting possibilities of communicating physically on stage whilst liberated from traditional rules of movement and narrative. The piece is heavy, inwardly directed, but physically rigorous and executed with such sincere investment, it provides a genuine window to the dark interior of the creative process. Also being performed are “Of Mind and Sky,” an ensemble piece set to somewhat pop-y original music by singer/songwriter Brian Mazzaferri and “Night,” a solo featuring Roche Janken, who visits from New York having just finished apprenticeships with Bill T. Jones/Arnie Zane Dance Company and the Stephen Petronio Company. Leopold will head out east after this performance to choreograph a dance for the New York International Fringe Festival.

Leopold is an ambitious director who has met with a great degree of success for her few years in the professional area. Many of the pieces presented in this show will likely appear as broad strokes, but they are drawn on a fresh canvas. This is a chance to see talented dancers reach out of their comfort zones to explore the murkier depths of art.