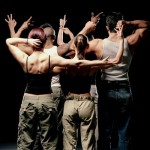 Kyle Vincent Terry is a capoeirista, breakdancer, actor and the artistic director of Chicago Dance Crash, a company that unites the talents of ballet dancers, b-boys and martial artists in raucous, wildly engaging performances. Terry talked with me about their show opening this weekend—a modernization of Goethe’s “Faust,” their “Keeper of the Floor” battles and the responsibility of artists to grow alongside their audiences.

So why did you choose “Faust?”

I think it’s huge! It’s so universal. A big part of what makes a person human is the things you don’t have. I can feel sympathy for someone because I can understand loss or lack of something. And with Faust, he fails to see that what he wants is based on his positive conception of what those things are. Like, say you want to party all the time. Well, yeah, you think about the party, but you don’t think about the hangover. You don’t think about if you have a lot of women at your disposal, you’re not really connecting with any of them. By giving away your soul, you cease to be human.

Plus, Faust is like hip-hop. It’s hip-hop culture: I want champagne, I want the girls, I want expensive things and I’m willing to do whatever and say whatever is necessary to get it. But then the thing that got you that stuff is no longer valid. Say for instance, I’m a great storyteller and I become famous for it. But once I’m famous I don’t have any more stories to tell that people can relate to.

Yes! The hardest part is getting over where physicality stops with accuracy. A lot of modern dance is based off the structure of the picture rather than the palate or the stroke. Dance is a symphonic playing out of a story; it has to keep building, building, building. And the last release comes almost too soon.

Dance Crash always has a lot of things going on simultaneously—theatrical shows and KTF. Can you tell me about the battles?

The most beneficial thing about KTF is it gets people out to an event to have a good time watching dance. It meets them at their level. It comes from wrestling—that’s why we have the belt—and breaking, which is almost forty years old. The cool thing about the battle is that the dancers learn to think about what to do next. I have to respond in the moment to what somebody is giving me. If somebody gives me a move, I have to answer with a better move, or change it to my style. It’s pandemonium. But the last show—“Screw the Champs”—was the best night of my life. Joel Hall danced. When did that last happen?

Do you have people come to KTF who then get turned on to dance and come to your choreographed shows?

Actually, we’ve had people come, see visiting artists and then go to see their stuff. And that’s really what we do—it’s not just to get you exposed to dance enough to come see us. We want you to go see other companies out there. That’s probably the most fulfilling thing one can have; affecting their community in a positive way.

I was talking with a guy who attended KTF. He said he loves the battles, but he doesn’t really know anything about dance. He wouldn’t necessarily go to see a dance show.

I think we’re all at fault. When people learn to do something it evolves, it becomes more specific and can become more isolated. If an artist is not being seen by the masses, they keep evolving, but that doesn’t mean people will start coming. You have to bring them in and bring them with you so you can evolve together. When I hear people say they don’t know dance, I think they do. But a lot of times people are afraid to say they don’t like it or the style is not for them. So I say, well, what type do you like? Because I guarantee there’s somebody out there doing it. It takes a combined effort for the dance community and John Q. Public to meet each other.

And all these styles will come together in “Faust.”

Yes. I’m really excited to see these ridiculously talented dancers explode on Friday—just erupt and shut it down! I want our audience who haven’t been exposed to modern dance experience it in a way they wouldn’t have thought possible, but also in a way they can understand. That’s the main point of the show: to tell an accessible story in a thoughtful and clear way.