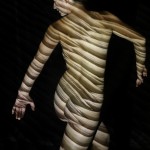 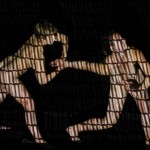 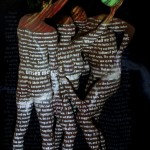 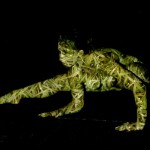 “We’re the naked ones. You guys can talk all you want, ” a cast member utters during the Living Canvas’ latest production “Unsex Me Here, ” which pays tribute to Lady Macbeth’s notorious soliloquy from Shakespeare’s Scottish play; but words, words, mere words encounter a fair share of difficulty generating a description for the group’s nude spin on the Shakespearian standard. “We’ve been calling it ‘naked people on scaffolding doing Shakespeare.’ We figured that would get people in here,” confesses the group’s founder and artistic director Pete Guither, as though his artistic mission doesn’t already attract enough attention. Adorning performers’ bodies and cradling their movements with elaborate slide projections, Guither, joined by director/choreographer Vanessa Passini and the Living Canvas, have brought to the National Pastime Theater a one-of-a-kind theatrical performance powerful enough to make even Shakespeare red in the cheeks.

Straddling the line between theater and performance art, “Unsex Me Here” challenges and dismisses the gendered premise of Shakespeare’s original work while also encouraging its audience to see the human form in a brand new light. While sacrificing her dress for Guither’s projections and reciting the few lines of Shakespeare that had inspired “Unsex Me Here,” Beth (Mindy Ryba) seems to symbolically exchange the burden of gender that had plagued Lady Macbeth in order to embark on a chance at love with Mac (Glenn Proud), instead. “I think there’s a love story in the show and that the rest of ‘Macbeth’’s action couldn’t take place if it didn’t exist,” director Vanessa Passini explains, so with Living Canvas in mind, she began the first steps of a revisionary overhaul. “I just went through and literally took pages out of a script and put them back together in a different order.”

But the preparation of a nude performance posed a fair set of challenges to the production’s cast who had never performed together before—let alone seen each other naked previous to rehearsals. “You can’t stick a bunch of naked people together if they’re just going to be freaked out,” says Guither chuckling. “We didn’t want to take ourselves too seriously because we’re naked,” Passini adds, which could explain the conversion of Shakespeare’s porter scene into a knock-knock-joke free-for-all. Before long, the cast was challenging each other to perform various tricks on the scaffolding and extending an invitation to the audience to shed their clothes and join them onstage. To this, one audience member eagerly jumped out of her seat and proceeded to tear her clothes off in an astounding five seconds, but suspicions surrounding her matching bra and t-shirt were confirmed during the Q&A session when it was revealed that she was a friend of the company. In an attempt to convince the audience to come back and get naked for the next show, Guither makes the appeal for a cure for performance anxiety, but there are plenty of good reasons. A cast member admits, “I just did it for the scaffolding.” (Elise Biggers)