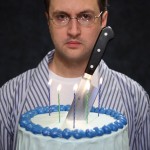 Fifty years has done little to lessen the impact of Harold Pinter’s “The Birthday Party,” a remarkable achievement when you consider that what made it noteworthy in 1958 (and apparently annoyed literal-minded critics and audiences to no end)—Pinter’s refusal to provide “meaning” to the proceedings—is part and parcel of modern plays in 2008, with the work of current “it girl” playwright Sarah Ruhl just one example of writing that demands of the spectator that they connect their own dots. In “The Birthday Party,” Stanley is an unemployed musician, apathetic and “existing” (he certainly isn’t “living” a life) in a seaside boarding house (run by doting landlady Meg) until the day when a knock at the front door produces two mysterious men who have arrived on the eve of his birthday. Twenty-four hours later, in a catatonic state, Stanley is taken away. Who are these men? Where are they from? And what has Stanley done (or not done) to them? Given this setup, is it any surprise that attempts to clarify the work’s elusiveness have produced some fascinating interpretations? Is the play an allegory for fascism? The trauma of birth? Death? A Kafkaesque examination of personal guilt? Is it, as some have made the case, a revenge fantasy for persecuted races (the two heavies are, after all, Jewish and Irish)? Admirably, director Aaron Snook has recognized that what has made this “Birthday Party” last is precisely the fact that it can’t be pinned down, nor should it, and subsequently he resisted any easy or topical reductions for this Signal Ensemble Theatre production. (Indeed, was I ever glad that Pinter’s brutes weren’t reduced to home-foreclosure reps arriving to take Meg’s charming seaside villa away from her.) Instead, this entertaining and worthwhile revival stands out as a vehicle for some great performances and as a showcase for Pinter’s theatrical language (all those trademark pauses and verbal non sequiturs still able to pack a wallop). If Snook shows a weakness for the Grand Guignol at times (the cracks in the wall glowing like embers was a little much for me) it is more than compensated for by two spectacular turns: as Meg, Mary O’Dowd combines great comic skill and expert timing to bring poignancy to her childlike landlady; as Stanley, Joseph Stearns exhausts all physical and emotional reserves in an intense, persnickety and beautifully modulated performance that makes you feel every nuance of his character’s psychological battering. Even if, like Stanley, you don’t seem to understand why. (Fabrizio O. Almeida)