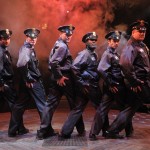 It’s not easy to find shows that are the perfect fit for the peculiarities of Marriott’s square theater-in-the-round configuration that also appeal to its suburban base audience, but “The Full Monty” is a bull’s eye in virtually every respect. Rather than try to shoehorn a big production that doesn’t really fit the space like last winter’s “Les Miserables, ” or the seemingly endless spade of inane new shows that Marriott keeps churning out, “The Full Monty” benefits from its show-within-a-show concept of six unemployed factory workers who end up as male strippers by using Marriott’s audience as the audience for the rehearsals and striptease. Director and choreographer Marc Robin keeps the action fast and furious and allows the cast to scratch below the surface of this work to reveal credible and multi-dimensional characters. I fully expected to see the usual suspects of smiling Disneyfied song and dance folks that tend to over-populate Marriott productions but instead, very ordinary—and indeed, dare I say, even drab-looking—folks were cast, which makes the comedy of the show as these guys start to learn their art, all the more funny. (Watch for the luxurious casting of showbiz veteran Arlene Robertson in an hysterical portrayal of a pianist/rehearsal coach who has seen it all.) But the show has its touching moments as well, particularly the father and son relationship that is played out with just enough pathos by KC Lupp and Matthew Levy to make us believe that there is some dignity behind what these guys are doing. The show is cutting-edge enough to keep the kids interested but just enough is not shown to keep grandma awake but not get her blue-rinse bun in a knot. (Dennis Polkow)