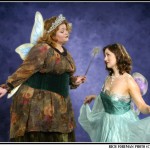 The forerunner of crowd-pleasing, supernatural-themed productions heavy on stagecraft and spectacle such as “Wicked,” Gilbert & Sullivan’s “Iolanthe” was the first stage work fully illuminated by electric light and caused quite a sensation and held audiences literally breathless when the Fairy Queen and her attendants entered with wands, wings and starlit crowns sparkling with transportable lights. In this rare Light Opera Works revival, noisy and poorly contained fog machines substitute for the effect. Fairies have lost their edge since Victorian England, to be sure, so in juxtaposing their enchanted realm with the more mundane world of British Parliament that the work satirically skewers, it is ironically the political realm that has remained business as usual more than century later. Substitute red and blue states for conservative and liberal, and the proceedings allow us a good laugh at ourselves in an election year. The irony is at a premium, with the fairies and the members of the House of Lords achieving the right amount of tongue in cheek, although James Harms’ Lord Chancellor tips over the top and lacks the rhythmic punch and precision necessary for his iconic patter songs. The singing, though excellent throughout, is distractingly and needlessly over-amplified, but the chorus, orchestra and overall sense of mayhem and spectacle, sparkle. (Dennis Polkow)