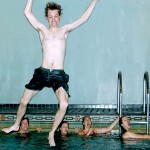 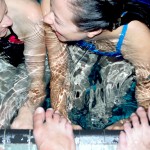 A true-life “how I spent my summer vacation” show-and-tell that can’t sustain itself but engages the audience along the way as only the Neofuturists can. “This is not the adventure I expected, ” writer and main character Sharon Greene admits to the audience, and the feeling is mutual—what begins on a high note as a seeming satire of camping culture ends up as a series of heavy monologues comprising an ecology lecture and a personal essay about destruction and redemption. “Fake Lake” is performed in a swimming pool, where the group incorporates movement in and around the water impressively and, as usual, they’re fun to watch, especially when they stick to their proven format of semi-improv comedy and playing games with the audience. The jokes hit home, even if the Neofuturists do find themselves to be a little too cute; but the environmentalist rants, which hit heavier and last longer as the play goes on, become tiresome even to the greenest among us, and one wishes that the story had been an excellent essay instead. (Monica Westin)