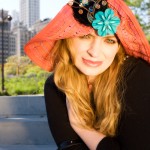 The 1980s musical “Tell Me on a Sunday, ” currently receiving a rare staging by the Bailiwick Repertory Theatre, demolishes the notion that an Andrew Lloyd Webber musical needs roller skates, chandeliers or animals to be memorable. Featuring only a single female performer (Harmony France) on stage the entire time, a small live band and a clutch of some of Lloyd Webber’s most memorable tunes, “Tell Me on a Sunday” tells the simple story of Emma, an English girl in New York trying to make it as a hat designer and navigating the tricky waters—sometimes flourishing, mostly floundering—of intimate relationships in the impersonal big city of Manhattan (think “Bridget Jones’ Diary” with a sprinkle of “Sex and the City” and you get the idea). The show began life as a concept album almost thirty years ago, and subsequently received more face lifts—dramaturgically speaking—than a Hollywood housewife, hitting Broadway in the mid-1980s (and making a star out of Bernadette Peters) with the help of American lyricist Richard Maltby, Jr’s “Manhattanization” of original lyricist Don Black’s already snappy observational ones (when Emma hits Los Angeles she remarks on how when “a woman’s bosom droops/fifty surgeons swoop”). Still, the score has always been and always will be this show’s main calling card, and Bailiwick’s production, note to note and line by line the 1985 Broadway version—the best of the bunch—boasts some of Lloyd Webber’s finest songs (the lyrical “Unexpected Song,” the unabashedly sentimental title cut, the defiantly punchy “Take That Look Off Your Face”), as well as showcases his prolific ability as a pure melodist and purveyor of the haunting leitmotif. If the work feels terse (it runs a brief sixty minutes) it’s because “Tell Me…,” in all its major stagings from London (whose 1990 revival with original English star Marti Webb I saw) to Broadway to Germany (where Emma was a “lovelorn lass from Munich”) to Summit, Illinois (anyone else remember Chicago musical star Hollis Resnik putting her stamp on this role at the long defunct Candlelight Dinner Playhouse?), was always accompanied by a second act, entirely danced, called “Variations” and based on Lloyd Webber’s take on Paganini’s A Minor Caprice No. 24 to form “Song and Dance.” Still, the constant through all these versions has been as a potential tour de force for the female performer. France, who should achieve this after a few more performances of the Bailiwick run—she’s still slightly hesitant with those tough lower notes and needs to own more of that wonderful set she’s been given to play on—is nonetheless a captivating and beguiling presence with a crystal-clear voice capable of emotional texture. In the assured hands of both director Elissa Woodruff and musical director Joshua Stephen Kartes, France is bound to earn some much-deserved praise and respect from the Chicago musical-theater bunch. And if there’s any justice in the world, so will the show’s undervalued composer. (Fabrizio O. Almeida)