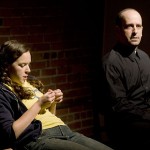 Ten-minute play festivals have one distinct advantage over other nights spent at the theater: the odds are strongly stacked in favor of seeing at least one play that touches the quick, and the ones that make you squirm are over before you know it. On the flip side, short-play festivals tend to be a very mixed bag, and often without any coherence of aesthetic or ideas tying the shows together.

Enter LiveWire Chicago Theatre’s first annual VisionFest, a forward-looking theater festival in search of relevant short plays that speak to one another through a common theme. Using online polling, LiveWire discovered that one of the most central themes the public wanted to see explored onstage was that of control. They then selected a lineup of nine plays, from submissions of more than 100 local, national and international playwrights, that concern control: whether political, artistic, religious or otherwise. The playwrights hail both from Chicago and as far away as Los Angeles and Massachusetts, in traditions ranging from Beckett to sci-fi, in various stages of their careers. LiveWire will be performing nine of the plays over two nights, and if you only get a taste of short plays one weekend this year, it should probably be this one.

The festival runs Friday, August 29 and Saturday, August 30 at the Chemically Imbalanced Theater. If you’re worried that the $15 ticket prices will eat into your entertainment budget, rest assured that the festival is BYOB, alcohol permitted—audiences are explicitly invited to relax and share feedback on the nine plays LiveWire eventually chose. The festival also features live music interludes to clear your theatrical palate. A preview of the lineup shows the range of styles LiveWire’s included:

From Peter Snoad, “The Greening of Bridget Kelly” follows a 16-year-old climate-change activist with a dark secret and revenge on her mind, who confesses to her priest more than he wants to hear. While most of the playwrights featured in VisionFest are emerging writers, Snoad is an established playwright whose past plays have won numerous awards.

In “Why Does Bush Hate Flags” by Kent Forsberg, two teenage boys, one gay and one straight, try to make sense of the world and themselves according to their religious and political beliefs.

Walter Thinnes’ “Muse” takes place in a sparsely furnished studio apartment, where the mother and girlfriend of a man who committed suicide four months earlier struggle for control over the young man’s inspiration, memory and art.

In a more figurative articulation of control, Larry Pontius’ “Their Master’s Voice” features a speaker mounted on the corner of a ceiling that describes the actions of two main characters… that is, until it experiences technical difficulties.

Jami Brandli’s “The Delivery” explores what happens when a husband and wife must come to terms with their different philosophies when the most planned procedure doesn’t turn out the way they expected. Brandli is another established playwright, with shows produced in the Los Angeles area.

An interview on improving efficiency in the workplace, “Flux” by Dale Perreault, follows one woman’s thoughts in the future while he co-worker is re-thinking the past. Can either know what will happen, or just happened, respectively?

At a remote, desolate bus stop, Sebastian Aguirrre’s characters in “Green” come in search of fertile soil to grow a rare breed of flower, where they meet a stranger who might have the answer.

On a more surreal note, “Happy Hour” by Scott Glander, a man tries to find a way to tell his buddies, two ostriches, that he may not be coming around that often to their hangout, the local watering hole.

Finally, Dan Morra speaks to perhaps the most timely theme of all: what happens when we seek control where it not necessary or even possible. In the playwright’s “Perfectly Human,” when a top secret project is about to lose its funding, a group of scientists (and their experiment) try to convince a hard-driving general to reconsider.