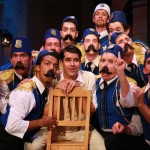 Start with a perfect score (Richard Rodgers), perfect lyrics (Lorenz Hart), perfect source material (William Shakespeare) and a perfect book (George Abbott) and then eviscerate all of the above and you get an idea of what to expect from David Bell’s “new adaptation” of 1938’s “The Boys From Syracuse” that is currently playing at Drury Lane Oakbrook. This Rodgers & Hart show is one of a mere handful that really are perfect specimens of the American musical theater (Cole Porter’s “Kiss Me Kate” and Bernstein’s “West Side Story,” also based on Shakespeare, are also on just about everyone’s short list) so you would think that anyone who wanted to “revise” such a show would have to be major supporter of, say, “Coke II.” Fast forward completely past one of the best overtures in any show and what you get are doo-wop harmonies, pseudo-Satie piano music and over-the-top caricatures that make “Road to Morocco” movies look sophisticated. Much of the original score has been gutted, as has the entire Act I climax. Yes, you do get some of the show’s classic standards such as “Falling in Love With Love,” which is literally shrieked instead of sung, and a truncated “This Can’t Be Love.” Chorus scenes and the show’s swing era ethos have been replaced with pop-gospel-revival arrangements and “American Idol” conventions. It is hard to remember the last time that such a great work has been so thoroughly disrespected and misrepresented and we can only hope that some area presenter who could actually deliver the goods on this one will do so soon. Meanwhile, far better to check out the full recording of a concert version of the work with all of the trimmings made a decade ago by New York City Center’s “Encores!” series where at least “Boys” can be heard as it was meant to be heard. (Dennis Polkow)