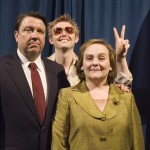 A sharp, polished and exciting performance of a real clunker of a play. Given the writer Gore Vidal’s propensity to produce epic books that can double as door stops, it’s no surprise that his play is in dire need of editing—far too long for its snappy, of-the-political-moment air, and heavily burdened by digressions into Human Nature, sometimes offensive monologues on race and gender, and often very stilted dialogue. “Weekend” examines the political climate of the late 1960’s through the drama surrounding Republican presidential hopeful Senator MacGruder, complete with blackmail, conspiracy, and bigotry. The play does manage to capture both the climate of 1968 and seem very timely today—with eerily familiar southern conservative voices talking about unpopular wars and America’s duty to spread democracy— and it’s often extremely witty, especially when shooting barbs at academia and Nixon, who ends up being an easy mark. The acting is superb, with Janet Ulrich Brooks stealing the show as a hilariously small-minded political wife. Ultimately, “Weekend” is entertaining but light, only as good as it is fast-paced, and could have benefited from heavy cutting. (Monica Westin)