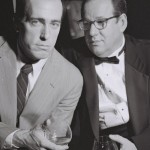 Although it’s commonplace these days to characterize George W. Bush as being the worst president of all time, those of us who lived through the presidency of Richard M. Nixon know better. Here was a man who had the world at his feet, who—it is sobering to remember in the midst of an election year where the outcome is a complete crapshoot—won the largest landslide in American presidential history and yet was so insecure that he considered one vote for his Democratic anti-war opponent George McGovern one too many. Thus, Nixon illegally bugged everything from his own private presidential office meetings and phone calls to having his cronies infamously attempt to bug the Democratic National Headquarters at the Watergate Hotel. Nixon’s own self-recorded tapes and the Watergate break-in and its subsequent cover-up led to his downfall and resignation. It is a tragedy worthy of Shakespeare, yet precious little art has been mined from it, unless you count Oliver Stone’s overblown and superficial “Nixon” film (John Adams’ fascinating opera “Nixon in China” never touches on the downfall). What actually happened in the White House on the eve of Nixon’s 1974 resignation? That is what Russell Lees’ 1996 “Nixon’s Nixon” attempts to answer in a Writers’ Theatre revival of the work for this election year. As Lees imagines it, Nixon (Larry Yando) and Secretary of State Henry Kissinger (William Brown) were hanging out and drinking that night, each wildly speculating on their own futures and self-interests. Nixon, who was an abysmal pianist in real life, is seen conducting along to records. At one heated moment, he even throws a drink in Kissinger’s face. At another, both are counting up the casualties of the administration, from every death in Vietnam and Cambodia—including civilians of those nations, mind you—to the college students gunned down in a 1970 anti-war protest at Kent State, Nixon noting that he would spend the rest of his days “wading in a pool of blood.” Nixon even admits at one point that he doesn’t want his daughter Julie, who was then running around the country defending her father, to know that “her father was a bum.” This is Nixon-bashing Nirvana run amok that fails to remotely square with the Nixon revealed in the very tapes that became his demise, who always pathologically felt above the fray and fully justified, no matter the action. What this play misses by miles is that Nixon truly had no conscience for his actions and never “got it,” anymore than “W” or Dick Cheney are likely to ever come to terms with Iraq. But pointing an angry finger and painting a superficial dark portrait of the power-monger is always more conscience-soothing than the far less attractive realization that we, as Americans, are fully complicit when we continue to elect and sustain leaders blind to the abuse of the very power that we so willingly bestow on them. (Dennis Polkow)