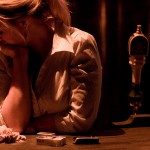 Had late American filmmaker Robert Altman been an Irish dramatist, he might have come up with something like “Scenes from the Big Picture.” For nearly three hours, Belfast native Owen McCafferty’s sprawling kaleidoscope of a play, directed by Scott Cummins for Seanachaí Theatre, charts a day in the lives of twenty-one citizens in Northern Ireland. At the center of this working-class community, plagued by everything from unemployment and recession to violent crime and urban blight, is Maeve (Kat McDonnell), childless and married to the philandering Joe (Thomas Vincent Kelly), who is having an affair with Helen (Carolyn Klein), the bar matron for the local watering hole where the town men drown their sorrows. Like most of the men, Joe works at the local slaughterhouse, managed by Theresa (Sarah Wellington), still grieving over the death of her dead son, whose body may have finally been found… And so on. There’s certainly a lot to admire here, from the strong performances (the aforementioned actors stand out in a first-rate ensemble, but they also have the benefit of playing the most developed characters) to McCafferty’s heartfelt and very funny writing. Presented in a thick Irish brogue, it’s accessible to the American ear in Seanachaí’s capable hands. On an intellectual level, the play’s ideas resonate: random encounters and brief interconnections as important to the “big picture” as any one political, cultural or socio-economic affiliation. And the play’s purpose—slice of life evocation of a community that could be yours or mine—is achieved. Indeed, the play’s celebration of community is even present right down to the staging: the twenty-one-member cast sits next to the audience in the front row of the Storefront Theater, springing into action to enact their scenes and/or to assist with a scene change. A good idea, as it was in the play’s London production at the National’s Cottlesoe Theatre back in 2003 under the direction of Peter Gill, since it adds an occasional burst of momentum to an increasingly sluggish narrative drive. But the main problem with ‘Scenes” is that ultimately, in performance, it adds up to less than the sum of its satisfactory parts. I felt very little emotional resonance as a whole, all those meandering and unresolved storylines—some needlessly introduced as late as two-and-a-half hours into the performance—were simply unable to grip me. I was occasionally moved, but I was mostly bored, and more conscious of the playwright’s technical achievements than his emotional ones. You might think of this as Scenes without a Big Payoff.  (Fabrizio O. Almeida)