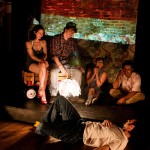 Roller skates, pinup girls, piles of stark white underwear and chickens, chickens, chickens—Charles L. Mee’s “bobrauschenbergamerica” is far from a narrative biographical portrait of expressionist/pop artist Robert Rauschenberg: it is, rather, much like a Rauschenberg painting come to life on stage: a chaotic explosion of vibrant images, text fragments and snapshots of characters at once strikingly familiar and slightly beyond name, drenched in cultural ephemera.

Chicago Fusion Theatre, under the direction of Jack Tamburri, leaps into Mee’s play (both noun and verb apply here), with little caution, and ecstatic energy to spare. This is a ninety-minute whirlwind of love, loss, sex and art—brief vignettes that interrupt one another, screeching to a halt almost before you can wrap your head around what’s happening. And this is a good thing, a VERY good thing—IF you’re looking to escape the standard theater fare and branch into more precarious waters.

The cast of “bobrauschenbergamerica” is a fluid ensemble, deftly keeping a handle on  characters who are constantly maneuvering in and out of focus as they encounter one another in various configurations and relationships. With the onstage world being one of nearly nonstop pandemonium, precision and control on the part of the actors is absolute necessity; and there are a few moments when the commotion of the play is overshadowed by sloppy—and in turn dangerous—execution of the more involved choreography that screams for more rehearsal. (The potentially graceful martini slip-n-slide in particular felt out of control and bordering on injury—it made my ass ache just watching it.)  But, on the whole, “bobrauschenbergamerica” is a satisfyingly bizarre and frenetically entertaining alternative to the kitchen sink. (Valerie Jean Johnson)