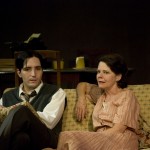 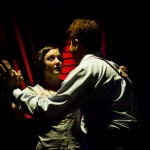 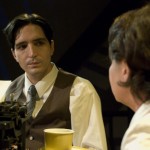 Tennessee Williams’ most autobiographical and breakthrough work began life as a short story (“Portrait of a Girl in Glass,” which can be read at Shattered Globe’s Web site) that was contracted to be reworked for an MGM screenplay, but which Williams shrewdly saw would have far more punch as a play as the piece evolved. Williams would retain a special affection for Chicago since “Menagerie” premiered here in 1944 and its initial success at the Civic Theatre (which Lyric Opera later shamelessly gutted to store scenery) led to its Broadway premiere the following year. It’s one of the most widely read American plays that every high schooler knows; when you bother to stage a work of such familiarity, you’d better have something either really new to say with it, or at least be able to tear up the place with the raw emotions written into the work. Unfortunately, Shattered Globe’s current production does neither. Once you get over the initial interactive shock that you’ve walked a few feet in front of the Joker’s principal thug in “The Dark Knight” sitting there onstage as you come in—veteran Chicago actor David Dastmalchian—when Dastmalchian, whose work I have hugely admired  in other plays, turns to the audience to narrate the play as son Tom, he is distant and aloof and never quite makes a connection with his audience nor his fellow cast members. When he blows up at his mother Amanda—played by Linda Reiter—in the first scene, it is so immediately over the top that there is nowhere else for him to go to achieve the needed trajectory of the play. Likewise, Allison Batty’s Laura is so overtly fragile from the outset that not even having her high-school-crush obsession flirting with her on the floor is able to snap her out of it long enough to entertain the possibility that she might dare consider herself attractive and worthwhile, for the first time and even for a moment, an emotional arc that must be achieved for the show’s climax to work. And though Reiter’s Amanda and Michael Falevits’ Jim are the most convincing characterizations, an overall lack of chemistry amongst the cast  reveals that director Kevin Hagan somehow missed the boat on this one. Most telling at play’s end is that cast members have visible tears streaming from their cheeks, which suggests method acting run amok given that audience members do not. After all, it’s not what the performers feel that counts: it what the audience feels that matters, which as Laurence Olivier used to say, is why we call it “acting.”(Dennis Polkow)