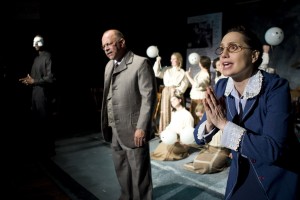 For me, one of the tests of a powerful historical/biographical drama is whether it compels you to want to know more about the person being dramatized, even if the merits of the dramatization are debatable. I can’t say playwright Michael Bettencourt’s “Dancing at the Revolution,” a Midwest premiere by Thunder and Lightning Ensemble about the life of early twentieth-century feminist and radical Emma Goldman, accomplishes this. Going into the show, I was disappointed that I hadn’t really known about the famous anarchist—sometimes that liberal arts education fails you—but coming out, I was more disappointed that I hadn’t been given substantial insight into her by the playwright. To his credit, Bettencourt’s non-linear structure for the piece, incorporating flashbacks to when Goldman was already at the height of her activism, as well as the script’s large-scale re-creations of political rallies and trials that call for a variety of early twentieth-century theatrical playing conventions (Agitprop; Commedia dell-arte), speak to his strong theatrical imagination and one that is as concerned with the telling of Goldman’s story as with the story itself. It also allows a resourceful director—here T&L Artistic Director D.B. Schroeder—and his fourteen-person cast to let loose and have fun trying to infuse big moments with theatrical verve, which they do to moderate success, and if their energy and enthusiasm were enough it might save the evening. But ironically “Dancing at the Revolution” only sparks to dramatic life in the quiet exchanges that bookend the rabble-rousing, through carefully observed scenes between the 60-year-old Goldman and Hannah (an austere Ruth Bistrow), the 20-year-old secretary to whom she dictates her memoirs, between Goldman and Alexander Berkman (an avuncular Dennis Newport), her lover and longtime companion in the fight for civil rights. It is in these moments that the hard-working and vocally assured Milissa Pacelli in the title role is most successful at conveying Goldman’s fascinating dualities: a fiercely independent woman who nonetheless craves companionship; a woman with maternal and mentoring instincts as powerful as her aggressive and pugnacious ones; a memorable and remarkable overachiever terrified of being forgotten. Sadly these moments, as well as the play’s focus and momentum, are all but lost in a second half that spends its time dramatizing the two years Emma Goldman spent in a state penitentiary. Little insight is gained in the process, and in attempting to dramatize the tortured lives of the women prisoners with whom Goldman served, the play descends into melodrama and loses its hold on the audience. But maybe the problem with this production is ultimately one of timing. After all, anyone fascinated with the phenomenon of an unexpected, political female force of nature like Goldman’s—also coincidentally bespectacled and brunette—need simply turn to today’s headlines instead of yesterday’s history books. (Fabrizio O. Almeida)