by Brian Hieggelke
September 14, 2008Filed under: 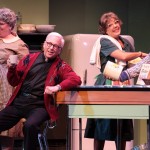 I descend from North Dakota Norwegian stock, and grew up with lefse, lutefisk and admonitions from my grandmother about dating Catholic girls. I confess this to explain my presence in Skokie for the opening of “Church Basement Ladies.” My people don’t get represented in the culture very often, so when they do, you go. At family get-togethers, we tend to crack each other up with reminiscences about particularly colorful shared stories and with playful jabs at our own eccentricities and shared culture. We laugh, but if you eavesdropped, you’d be bewildered and bored. Likewise, “Church Basement Ladies” is like a giant in-joke for Lutherans, especially those of us who’ve spent some time in Minnesota, where it’s set (and where it performed to sell-out crowds for two years). For everyone else, you’ll likely find it a baffling, schmaltzy musical bordering on camp. A series of vignettes set in the early-sixties basement kitchen of a small-town Minnesota church—weddings, funerals, Hawaiian Easter fundraisers, “Ladies” features the return to the cloth of William Christopher (Father Mulcahey of TV’s “MASH”) playing, I think, the same character, plus the strong pipes of Stella Fasonello as Signe Engelson, whose progression from student to bride provides the closest thing to a plot, the graceful Margaret Curry as Signe’s once-maverick mother who’s now the prevailing force of reason, Mrs. Elroy Engelson, and, as the comically conservative force at the center of it all, Jean Liuzzi as Mrs. Lars Snustad, done with appropriately overblown bluster. Karen Pappas as Mrs. Gilmer Gilmerson offers the over-the-top physical humor and exaggerated accent you’d expect from this production. Drew Jansen’s songs are by turns clever and predictable, and Jerod Paul Grohs’ set design perfectly evokes the kitchens of its time, right down to the picture of a bearded man praying over bread that hung in my late grandma’s Fargo home. In fact, I think she would have really enjoyed this play. (Brian Hieggelke)