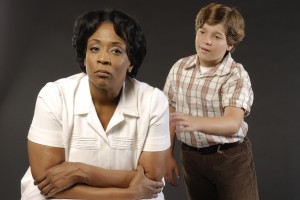 “’Caroline, Or Change’ is the largest single production that Court Theatre has ever attempted,”  artistic director Charles Newell tells his company on the first day of rehearsal. “We tried to do it in the past, we tried to figure out when and how, and only now have the stars aligned to make it possible.”

When you start with words written by Pulitzer Prize-winner Tony Kushner and music by Tony-nominated Jeanine Tesori, you start on pretty fertile grown from which to build a solid production. “Its not just about making great music, but how can that music serve the emotional storytelling,” Newell says of the intricately crafted material.

“Caroline, Or Change” is the story of an African-American housekeeper working in a stifling basement laundry room in Louisiana in 1963. The coins that 8-year-old Noah carelessly leaves behind in his pocket are more than just spare change to Caroline and her family. The little issue of change in pockets becomes a catalyst for big drama as the characters, all of them, cope with loss. Blending blues, gospel and traditional Jewish melodies in a complicated score makes the show a mammoth operation and demands expertise.

“You only do Hamlet when you have a Hamlet,” explains Newell of the necessity to have an actress dexterous enough to play the title character in this demanding piece of theater that straddles the line between opera and musical theater. E. Faye Butler is that actress.

“She started her career wanting to be a classical-theater actor, only by circumstance did she begin to develop a career as a musical theater performer,” says Newell of his star. Butler was last seen in “Ain’t Misbehavin’ “ at The Goodman and has worked on every major stage in Chicago. Her abilities with text and character, coupled with her musical ability, give her the arsenal of tools demanded to play the title role.

Once Newell and longtime collaborator and musical director Doug Peck had Caroline, the rest of the cast came together. Then they set to the difficult task of bringing the words to life. “How do we talk about this piece that is about such complicated human emotions that can be perceived as dark and as a downer,” Newell asks, “when in fact the energy and life in the piece is so life affirming?”

From the coins in a cup next to the washing machine to the death of a mother, “Caroline, Or Change” is about coping with life. After years in the works, Court Theatre is finally ready to bring that struggle to stage. (William Scott)